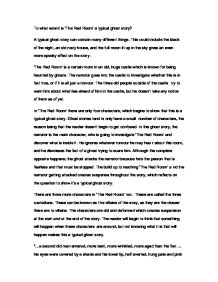 To what extent is 'The Red Room' a typical ghost story? A typical ghost story can contain many different things. This could include the black of the night, an old rusty house, and the full moon lit up in the sky gives an even more spooky effect on the story. 'The Red Room' is a certain room in an old, huge castle which is known for being haunted by ghosts. The narrator goes into the castle to investigate whether this is in fact true, or if it is all just a rumour. The three old people outside of the castle try to warn him about what lies ahead of him in the castle, but he doesn't take any notice of them as of yet. In 'The Red Room' there are only four characters, which begins to show that this is a typical ghost story. Ghost stories tend to only have a small number of characters, the reason being that the reader doesn't begin to get confused. In this ghost story, the narrator is the main character, who is going to investigate 'The Red Room' and discover what is inside it. ...read more.

This doesn't seem to be any different in 'The Red Room'. The story shows that it is set on a dark night because in the story it says "...as to be invisible in the moonlight." It shows that the sky is dark and that the moon is so bright it is beaming over the house, which gives a spooky effect on the story. There is plenty of suspense throughout this story, which includes the three custodians' right at the beginning of the story. They build up suspense and they draw the reader into the story which creates anticipation. The structure of 'The Red Room' is laid out how it should in a typical ghost story. Ghost stories are usually short so the reader can keep their attention on the story which is what has happened in this story. If it the story goes too fast and becomes too complicated the reader will get bored and switch off from the story. The amount of events in a typical ghost story is significant to the build-up of the climax. There are five different events that happen in this story. ...read more.