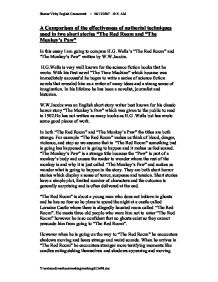 The Red Room and The Monkey's Paw(Compare and Contrast)

A Comparison of the effectiveness of authorial techniques used in two short stories "The Red Room and "The Monkey's Paw" In this essay I am going to compare H.G .Wells's "The Red Room" and "The Monkey's Paw" written by W.W.Jacobs. H.G.Wells is very well known for the science fiction books that he wrote. With his first novel "The Time Machine" which became was immediately successful he began to write a series of science fiction novels that revealed him as a writer of many ideas and a strong sense of imagination. In his lifetime he has been a novelist, journalist and historian. W.W.Jacobs was an English short story writer best known for his classic horror story "The Monkey's Paw" which was given to the public to read in 1902.He has not written as many books as H.G .Wells but has wrote some good pieces of work. In both "The Red Room" and "The Monkey's Paw" the titles are both strange. For example "The Red Room" makes us think of blood, danger, violence, and stop so we assume that in "The Red Room" something bad is going has happened or is going to happen and it makes us feel scared. "The Monkey's Paw" is a strange title because the "Paw" is part of a monkey's body and causes the reader to wonder where the rest of the monkey is and why it is just called "The Monkey's Paw" and makes us wonder what is going to happen in the story. They are both short horror stories which display a sense of terror, suspense and tension. Short stories have a simple plot, limited number of characters and the outcome is generally surprising and is often delivered at the end. "The Red Room" is about a young man who does not believe in ghosts and he has no fear so he plans to spend the night at a castle called Lorraine Castle where there is allegedly haunted room called "The Red Room". ...read more.

This shows that he is afraid of the dark. He starts to get very scared when he notices that all the candles seem to be going out on their own accord "What's up? I cried, with a queer high note getting into my voice somehow". This tells the reader that he is indeed petrified of the candles being snuffed out. He then in his confusion trying to light the candles hits his head and then loses consciousness. When he wakes up he is then regretful of his arrogance and this suggest Nemesis. Nemesis is an act of effect or retribution. He has been hit on the head because of his doubts in believing that the red room was not haunted. He then believes that the room is haunted as he says "Yes said I "the room is haunted". The characters in "The Monkey's Paw" are The White Family, Sergeant Major Morris and the business man from Herbert's Workplace. The White Family lives in an isolated area and do not like it "Path's a bog and road's a torrent". They are at first acknowledged as people who don't like getting into trouble and are friendly family "father and son were at chess". When the sergeant major arrives they are eager to listen to his stories outside of the country. This makes the reader to think that they haven't been out that much anywhere then where they are living. When they hear of the monkey's paw being able to grant wishes they immediately start laughing and this shows they are arrogant suggesting Hubris "laughter jarred". They are also arrogant when they jest about what they want to wish for example "Don't you think you might wish for four pairs of hands for me?" This shows that they disbelieve in the magic. This causes the reader to believe that they are haughty. Then when Mr. White wishes for his wish he then sees faces in the fire and he begins to feel a little bit afraid e.g. ...read more.

The character is affected because it displays him as smart and clean. These characteristics affect both the reader and the character. My conclusion is that both writers are successful in building suspense, fear and tension. H.G.Wells has created a lot of suspense by making the character of the young man go through many things. He has created tension and fear by using similes, metaphors and personification. One of similes that I liked very much is "darkness closed upon me like the shutting of an eye". It is a powerful simile that describes darkness as living. He has used language effectively to describe the surroundings and atmosphere and builds up tension and suspense. He has used archaic language to make the story more ancient and interesting. He makes the surroundings more scary and alive. W.W. Jacobs is also successful in creating suspense, tension and fear. He uses less complicated vocabulary than H.G.Wells to make the language easier to understand however he uses old archaic language. One of my favorite metaphors is "pulsating shadows on the ceilings and walls". This makes me feel as if shadows are alive. He has used many words to build up tensions such as words to build up tensions such as "heavy footsteps came towards the door" and "three times he paused at the gate". This builds suspense and tension. They are both good writers and their stories were enjoyable to read. The moral of "The Red Room" I think is "do not underestimate anything or you will pay retribution". "The Monkey's Paw's moral I think is "be careful what you wish for". After reading both of these short stories I would say the one that I enjoyed the most was "The Monkey's Paw" because it filled me with suspense and I wanted to know what happened at the end. "The Red Room" was alright but it was a bit dull and a bit boring. There was no ghost or anything evil so the ending was a bit of a letdown. Shariar Vicky English Coursework 1 08/12/2007 10:31 AM C:\Documents and Settings\Shariar\My Documents\Coursework For English\The Red and The Monkey's Paw.doc ...read more.