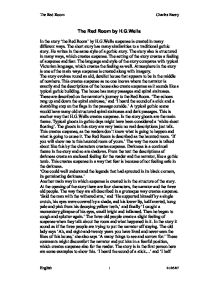 The Red Room by H.G.Wells

The Red Room by H.G.Wells In the story 'the Red Room' by H.G.Wells suspense is created in many different ways. The short story has many similarities to a traditional gothic story. He writes in the same style of a gothic story. The story also is structured in many ways, which creates suspense. The setting of the story creates a feeling of suspense and fear. The language and style of the story compares with typical Victorian language, which creates the feeling as well. Atmosphere in the story is one of the main ways suspense is created along with imagery. The story evolves round an old, derelict house that appears to be in the middle of nowhere. This creates suspense as no one knows where the narrator is exactly and the descriptions of the house also create suspense as it sounds like a typical gothic building. The house has many passages and spiral staircases. These are described on the narrator's journey to the Red Room. 'The echoes rang up and down the spiral staircase,' and 'I heard the sound of a stick and a shambling step on the flags in the passage outside.' ...read more.

The three old people create a slight feeling of suspense when they talk about the room and what happened in it. In the story it sound as if the three people are trying to put the narrator off staying. The old lady says 'Ah, and eight-and-twenty years you have lived and never seen the likes of this house,' she also says 'A many things to see and sorrow for.' These comments might discomfort the narrator and put him in a fearful position, which creates suspense also for the reader. The story is in the first person here are some examples to show this. 'I heard the sound of a stick...' and 'I half suspected the old people.' Because the story is in the first person it makes it sound like a diary or a journal. Suspense is created because of the story being in the first person because the audience doesn't know any more information than the narrator who is visiting the red room. The audience would have no idea of what should happen next so they are not expecting the shocks of surprises. ...read more.

At first the extinguishing is blamed on a draught of wind 'that draughts a strong one.' Which does not create suspense, as there is no suggestion of any supernatural happenings taking place. On the fourth of fifth time a candle goes out the narrator actually sees it go out and this might make your heart beat faster as you are worried and it creates suspense as you stand for 5-10 seconds completely still to see if you can hear anything that suggests presence of another being in the room. The suspense really starts to begin when the narrator walks over to the 4th and 5th extinguished candles as he says 'there was no mistake about it. The flame vanished, as if the wicks had suddenly been nipped between a finger and thumb, leaving the wick neither glowing or smoking, but black.' This quotation suggests that very presence. The ending of the Red Room story is a classical finish, which involves the 'I woke up the next morning', this way the story doesn't get too complicated and also no explanations of what happened in the Red Room need to be thought up as an ending. The Red Room Charles Facey English 1 01/05/07 ...read more.