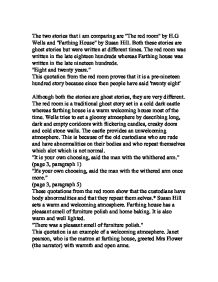 The two stories that i am comparing are "The red room" by H.G Wells and "Farthing House" by Susan Hill. Both these stories are ghost stories but were written at different times. The red room was written in the late eighteen hundreds whereas Farthing house was written in the late nineteen hundreds. "Eight and twenty years." This quotation from the red room proves that it is a pre-nineteen hundred story because since then people have said 'twenty eight' Although both the stories are ghost stories, they are very different. The red room is a traditional ghost story set in a cold dark castle whereas farthing house is a warm welcoming house most of the time. Wells tries to set a gloomy atmosphere by describing long, dark and empty coridoors with flickering candles, creaky doors and cold stone walls. The castle provides an unwelcoming atmosphere. This is because of the old custodians who are rude and have abnormalities on their bodies and who repeat themselves which alot which is not normal. "It is your own choosing, said the man with the whithered arm." (page 3, paragraph 1) "It's your own choosing, said the man with the withered arm once more." (page 3, paragraph 5) ...read more.

* During the red room the tension gradually rises and rises until it reaches it's climax just before the end of the story. as the tension builds throughout the story the sentences sometimes become shorter and seam quicker to read. This suggests thst the man is pannicking. "I shut them in and walked down the chilly echoing passage." (page 6) -gradual build of tension- "I bruised myself on the thigh against the tablem, I sent a chair headlong, I stumbled and fell and whisked the cloth from the table in my fall." (page 12) The first quotation from page six of the red room shows that there is a little tension because of the use of the words 'chilly' and 'echoing'. It is also the kind of passage that is read slowly and calmly which shows that there is not very much tension present. The quotation from page twelve shows that there is a lot of tension present. Wells creats this tension by using commers often. Using commers often, helps the reader to read the passage quickly because there are no 'link up' words, for example 'and' which slow down the reading of the passage. Wells also creats tension by using emotive or charged language. ...read more.

Mrs Flower is kind and very calm. This can be told in the way that she feels sorry for the ghost which proves that she is kind. She also visits her aunt which is cery thoughtfull. When Mrs Flower sees the ghost she is calm and even follows it downstairs. The main charachter in 'the red room' is a very confident man. " 'I can assure you said I, that it will take a very tangible ghost to frighten me.' " This quotation from 'the red room' shows that the main character is confident that the ghost will not scare him although when he meets the ghost he is not calm. I think the most successful of the two ghost stories is 'the red room'. I think this because it has all the ingredients of a classic ghost story. For example the dark castle, the cold stone walls and, flickering candles and unwelcoming people. Farthing House on the other hand is light, warm and friendly which does not set a very good atmosphere for a ghost story. I also prefure 'the red room because' the tension is a lot higher throughout the story which keeps you on the edge of your seat. I dislike the way that the tension is placed in 'Farthing House' because just as I wad getting excited the tension reduced and dissapointed me. ...read more.