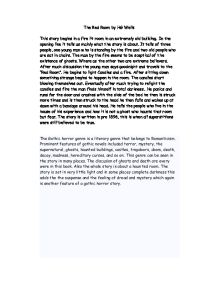 The Red Room by HG Wells

The Red Room by HG Wells This story begins in a fire lit room in an extremely old building. In the opening line it tells us mainly what the story is about. It tells of three people, one young man who is standing by the fire and two old people who are sat in chairs. The man by the fire seems to be sceptical of the existence of ghosts. Where as the other two are extreme believers. After much discussion the young man says goodnight and travels to the "Red Room". He begins to light Candles and a fire. After sitting down something strange begins to happen in the room. The candles start blowing themselves out. Eventually after much trying to relight the candles and fire the man finds himself in total darkness. He panics and runs for the door and crashes with the side of the bed he then is struck more times and is then struck to the head he then falls and wakes up at dawn with a bandage around his head. He tells the people who live in the house of his experience and how it is not a ghost who haunts that room but fear. ...read more.

The echoes rang up and down the spiral staircase, and a shadow came sweeping up after me, and one fled before me into the darkness overhead." The writer also uses colour very well in this story he uses dark derpressing colours associated with death, black is used at funerals it also gives us the feeling of the unkown. Red is the colour of blood which can be seen as death also and danger. The writers use of minor characters adds depth to the story and the use of some of the physical descriptions adds suspense. The use of the central character adds to the tension and suspense by not believing. With him not believing and all these things happening its adds the the shock factor. Another key factor is how the main character behaves throughout the story. He begins not believing in ghosts this can be seen when he says ""Well," I said, "if I see anything tonight, I shall be so much the wiser. For I come to the business with an open mind" he also says "That it will take a very tangible ghost to frighten me", as he progresses along the corridor in the next paragraph he begins to feel uneasy this can be seen in when he begins to think this "I was about to advance, and stopped abruptly. ...read more.

It use the long dark corridors, the candle lit rooms, the creaking floorboards and of cause this whole idea of the one haunted room. The writer uses death imagery to help maintain the tension this all relates back to the gothic horror genre. The long corridors the dark rooms and the shadows all portray a very scary atmosphere. The repeated warnings towards this ghost is another negative feeling the reader gets. The continued warning from the owners to the main character always fall on deaf ears this cause the reader to want to warn the main character them self which puts them in the story which inturn ads to the tension. As I said in part two the whole story is set in candle light and it many parts total darkness. The fear of the dark is one of mans biggest primal fears this is turn ads tension to the story. Over all red room is a very well written story the way the writer creates tension is excellent. He uses the gothic horror genre very well and the light ascent as well, also the very main character helps build tension as does the three house keepers. My overall opnion of the story is very good I enjoyed it very much and like how the writer wrote it. ...read more.