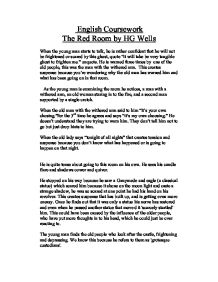 English Coursework The Red Room by HG Wells When the young man starts to talk, he is rather confident that he will not be frightened or scared by this ghost, quote "it will take be very tangible ghost to frighten me." unquote. He is warned three times by one of the old people, this was the man with the withered arm. This creates suspense because you're wondering why the old man has warned him and what has been going on in that room. As the young man is examining the room he notices, a man with a withered arm, an old woman staring in to the fire, and a second man supported by a single crutch. When the old man with the withered arm said to him "it's your own chosing."for the 3rd time he agrees and says "it's my own choosing." ...read more.

Once he finds out that it was only a statue his nerve has restored and even when he passed another statue that moved it 'scarcely startled' him. This could have been caused by the influence of the older people, who have put more thoughts in to his head, which he could just be over reacting to. The young man finds the old people who look after the castle, frightening and depressing. We know this because he refers to them as 'grotesque custodians'. The word 'grotesque' suggests something that is disgusting and horrible. Possibly he could be referring to them in this way because he feels awkward with them. Once he has left the room he describes his feelings when he was 'in the company of the old people. ...read more.

Then he moves onto the corridor in which the 'Red Room' is situated. The first thing noted about this corridor is the shock it gave him to see moonlight streaming through a window, illuminating everything and making it look black and silvery, which is almost unreal because it is only imaginable in a scary movie. He then notices that it looks untouched and there are thick layers of dust to prove that no one has been there for a long time. As he begins to move around he notices a shadow of what, to him, looked like a figure 'crouching to waylay' him. He is very paranoid and is becoming extremely nervous. When he is in the struggle, is staggering all over the room, trying to stay on his feet. He can't remember all that happened when he was in the darkness, but that the falling to the floor lasted an age. By Marcus Giannandrea 10M ...read more.