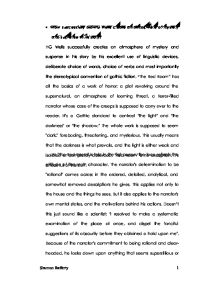 The Red Room How successfully did HG Wells create an atmosphere of mystery and suspense in his story?

* How successfully did HG Wells create an atmosphere of mystery and suspense in his story? HG Wells successfully creates an atmosphere of mystery and suspense in his story by his excellent use of linguistic devices, deliberate choice of words, choice of verbs and most importantly the stereotypical convention of gothic fiction. "The Red Room" has all the basics of a work of horror: a plot revolving around the supernatural, an atmosphere of looming threat, a terror-filled narrator whose case of the creeps is supposed to carry over to the reader. It's a Gothic standard to contrast "the light" and "the darkness" or "the shadow." The whole work is supposed to seem "dark," foreboding, threatening, and mysterious. This usually means that the darkness is what prevails, and the light is either weak and isolated or completely absorbed. "Red Room" is no exception; it's chock full of this stuff. As "The Red Room" is told in the first person, the tone reflects the attitude of the main character. The narrator's determination to be "rational" comes across in the ordered, detailed, analytical, and somewhat removed descriptions he gives. This applies not only to the house and the things he sees. But it also applies to the narrator's own mental states, and the motivations behind his actions. Doesn't this just sound like a scientist: "I resolved to make a systematic examination of the place at once, and dispel the fanciful suggestions of its obscurity before they obtained a hold upon me". ...read more.

Wells's writing is certainly well ordered. His sentences and paragraphs are always neatly divided and structured in a point-by-point way fashion that complements the narrator's analytical tone. But that doesn't mean the writing is simple or terse. "I entered, closed the door behind me at once, turned the key I found in the lock within, and stood with the candle held aloft, surveying the scene of my vigil, the great red room of Lorraine Castle, in which the young duke had died" This kind of sentence can lend an air of pretension to the writing. So too does Well's word choice. He often tends towards old-fashioned words, "foregathered", and frequent use of overdone modifiers, as in "absolute silence" or "marvellous distinctness". And then, every so often, Wells will just hit you with something totally over the top: "My candle was a little tongue of light in its vastness, that failed to pierce the opposite end of the room, and left an ocean of mystery and suggestion beyond its island of light". "Ocean of mystery" and "island of light"? Kind of beautiful, but for some people that sort of imagery could sound just a little too epic. Both fear and darkness are frequently described as active, threatening forces in the story, "darkness closed upon me like the shutting of an eye, wrapped about me in a stifling embrace." What's the deal with all of this personification of two abstract, nonliving things? ...read more.

What about the dire pronouncement the man with the shades makes at the end? He proclaims that the red room will remain haunted by Fear until the house is gone. We think this suggests something else about fear. Fear isn't just in one's head; we should actually take that language of it haunting a place seriously. The eerie atmosphere and the dreadful history of the red room combine to make it a place that will scare whoever visits it, even if they "know" it's not really haunted. What happened to the narrator will happen to anyone else who tries. Each additional person's defeat by fear in the red room will only increase its frightful reputation. When all's said and done, you might still feel let down about there being no ghost. In which case, here's something else to think about. We get the conclusion that there is no ghost from the narrator, but it's not clear how he knows that. Sure he and the guy with the shades, and almost certainly Wells himself (who's trying to make a point), think there's no real ghost. But what was blowing out all of those candles? What took care of the fire just when the narrator needed it? We didn't have any mention of wind, besides one measly draft that makes one of the candles flicker (i.e., not nearly powerful enough to blow out multiple candles). And did the narrator really get so battered just from crashing into things? "The Red Room" answers none of these questions. 1 Shannon Rafferty ...read more.