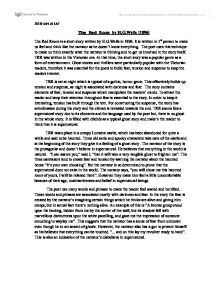 The Red Room is a short story written by H.G.Wells in 1896. It is written in 1st person to make us feel and think like the narrator as he doesnt know everything.

The Red Room by H.G.Wells [1896] The Red Room is a short story written by H.G.Wells in 1896. It is written in 1st person to make us feel and think like the narrator as he doesn't know everything. The poet uses this technique to make us think exactly what the narrator is thinking and to get us involved in the story itself. TRR was written in the Victorian era. At that time, the short story was a popular genre as a form of entertainment. Ghost stories and thrillers were particularly popular with the Victorian readers, therefore it was essential for the poets to build fear, tension and suspense to keep the readers interest. TRR is set at night which is typical of a gothic, horror genre. This effectively builds up tension and suspense, as night is associated with darkness and fear. The story contains elements of fear, tension and suspense which manipulate the readers' minds. To attract the reader and keep their attention throughout fear is essential to the story. ...read more.

In the story the fear is created by the narrator's imagining certain things which he thinks are alive and giving him creeps, but in actual fact there's nothing alive. An example of this is "A bronze group stood upon the landing, hidden from me by the corner of the wall, but its shadow fell with marvellous distinctness upon the white panelling, and gave me the impression of someone crouching to waylay me". This suggests that the narrator has a sense of fear from unknown even though he is not scared of ghosts. However, the narrator also has a gun to protect himself as his believes that everything can be touched. "... and on this lay my revolver ready to hand". This is also an indication of the narrator's disbelieve in supernatural. As the story goes on the narrator started to feel uncomfortable in the red room, as he heard and saw mysterious things in the dark corners of the room "... ...read more.

He clarifies his experience in the dark room that the only thing that haunts people in the room is the fear of darkness. The language used in TRR is very essential to keep the reader interested. As the story is based on the central theme of fear, the poet uses personification as a technique to create fear, tension and suspense in TRR. Clich�s are used in the story to give it a feeling of a typical horror story. I think that this story is one of the best and famous stories of all time, due to the fact that it is not supernatural but contains elements of darkness and fear. This story is very effective as it don't disclose the details until the end and this keeps the reader in suspense until the closing lines. The main aim of TRR is at the end of the story when fear is revealed as a dangerous force, which counts among the greatest enemies of any human being. The writer is telling us that we are only alarmed by fear itself in the darkness and nothing else. ?? ?? ?? ?? ZEESHAN ALTAF ...read more.