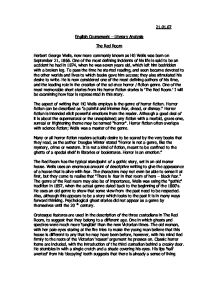 21.01.07 English Coursework - Literary Analysis The Red Room Herbert George Wells, now more commonly known as HG Wells was born on September 21, 1866. One of the most defining incidents of his life is said to be an accident he had in 1874, when he was seven years old, which left him bedridden with a broken leg. To pass the time he started reading, and soon became devoted to the other worlds and lives to which books gave him access; they also stimulated his desire to write. He is now considered one of the most defining authors of his time, and the leading role in the creation of the science horror / fiction genre. One of the most memorable short stories from his horror fiction stories is 'The Red Room.' I will be examining how fear is represented in this story. The aspect of writing that HG Wells employs is the genre of horror fiction. Horror fiction can be described as "a painful and intense fear, dread, or dismay." Horror fiction is intended elicit powerful emotions from the reader. Although a good deal of it is about the supernatural or the unexplained; any fiction with a morbid, gruesome, surreal or frightening theme may be termed "horror". ...read more.

When he begins to 'cough and splutter' again, we see his physical frailties as just an old man. There is an important social class distinction between the old custodians of the house, and the new 'reasoning' attitude of the man. It is also important to note that the Victorians believed that they were quite revolutionary, and they tended to look back at the past as if it were the dark ages. The setting is also typical of Gothic and Victorian ghost stories. Dilapidated and derelict buildings were often inhabited by people who neglected their own welfare and were regarded as morally corrupt. Victorians prized order and appearances important indicators of character. Gloominess suggested by the cold and dark contribute to the atmosphere of oppression and neglect. A 'monstrous' shadow is created as the old man pours a drink; the firelight engorges and distorts it so it seems as if the shadow is mocking him. By this time, the narrators feeling of calmness in the presence of these strange old people has taken a battering 'I had scarcely expected these grotesque custodians,' they seem unreal or even atavistic. He begins to feel uncomfortable with their 'evident unfriendliness to me and each other.' ...read more.

Fear is created with the narrator continuing to using reason to reassure himself, "in a flash of absent-mindedness?" He then realises that the candles are not just going out from a sudden gust of wind, "the flames vanished as if the wicks had been suddenly nipped between finger and thumb." The tension escalates and fear is represented with a queer 'high note getting into my voice.' His mind starts to give way to the hysterical as he speaks to the rapidly disappearing candle flames. The pace of the section also increases as he struggles to keep up with the rapid extinction of light. Metaphors of fear and darkness are used '... closed upon me like the shutting of an eye' '... wrapped about me in a stifling embrace' Extensive description of his failed attempts to find the door and his ever rising fear are used to heighten tension. The story reopens in the light, as if he is now back in the real world. The old custodians no longer seem strange or insane; they speak to him as one who 'grieves for a broken friend.' When describing what 'followed him through the corridor and fought against him in the room' he describes fear as a tangible thing, and gives it human qualities. This kind of personification adds to the effectiveness of the story as a whole. ...read more.