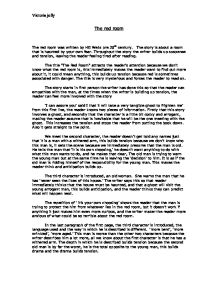 The red room The red room was written by HG Wells pre 20th century. The story is about a room that is haunted by your own fear. Throughout the story the writer builds up suspense and tension, leaving the reader feeling tired after reading. The title "The Red Room" attracts the reader's attention because we don't know what the red room is, this immediately makes the reader want to find out more about it, it could mean anything, this builds up tension because red is sometimes associated with danger. The title is very mysterious and forces the reader to read on. The story starts in first person the writer has done this so that the reader can empathise with the man, at the times when the writer is building up tension, the reader can feel more involved with the story 'I can assure you' said I that it will take a very tangible ghost to frighten me' from this first line, the reader knows two pieces of information. Firstly that this story involves a ghost, and secondly that the character is a little bit cocky and arrogant, making the reader assume that is inevitable that he will be the one meeting with the ghost. This increases the tension and stops the reader from putting the book down. Also it gets straight to the point. ...read more.

The story is set in a castle which is perfect for the theme, the castle is spooky and mysterious, it gives the reader this feel without describing the castle, because the reader thinks that this is what castles are like that they are spooky and haunted, the writer chose a castle because they are large the part of the castle where the red room is, is out of bounds, it wouldn't have the same affect if the story was set in a house. The last paragraph on page three is very descriptive, it is a long paragraph with, few sentences, longer sentences build up tension because they make the reader read it faster, picking up pace and suspense as you read. The young man is losing a slight touch of his confidence already by describing things ad 'ghostly,' if he doesn't believe in ghosts, which he stated at the beginning, then he wouldn't use this word. The passage is underground 'subterranean' this makes the reader picture a dark damp chilly passage, this one word sets the scene for the atmosphere, you know it must be dark because you cant have any natural light underground, and the only source of light they would have is a candle. ...read more.

When the man says that the shadows take another step towards him, he is saying that fiction is closing in on him and as it does, he is been drawn away from the truth. In the story, the man has a revolver. This symbolizes violence, which leads to conflict, and conflict builds tension. Fire symbolizes warmth and wards off evil. The old people with disabilities symbolize the fear inside him and how he would not like to end his life. However, at the end, he does become like them, talking in their style about what had happened. Panic comes as the room gets darker with him racing around trying to keep up with the candles as they go out. Approaching the end, the tension increased, as the sentences become shorter. Clumsily he knocks his thigh against the table. From here on he loses control. He loses his quest for the truth as he tries to light the fire with the last candle. He runs into something and knocks himself out. Then there is a gap in time; and the tension starts to decrease slowly. He wakes up the next morning after being rescued at dawn by the old people. He personifies fear with the red room. He has had a fight with his fear and in the end his fear wins. I think the red room symbolizes fear. Nothing is actually in the room except what you believe is there. Victoria jolly ...read more.