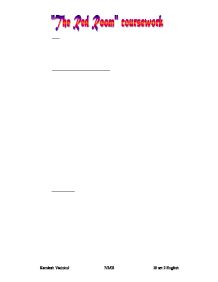 The red room is a classic pre-twentieth short story and is written as a gothic mystery. A traditional gothic mystery would include old houses/ mansions, winding passages, ghastly ghosts, haunted rooms and darkness. The characters are described in detail and any unusual features are pointed out to the reader e.g. "The man with the withered arm", what happened to the man, did something or someone attack him, or was it the red room and what he experienced in there. The narrator would feel uncomfortable when seeing the man because it would make him think twice about what might happen to him in the red room. "The old women sat staring hard into the fire, her pale eyes wide open", the narrator and reader would be left wondering why she is concentrating on the fire, there could be something she is hiding and when she does stop looking at the fire and speaks what will she say. ...read more.

and their weird lives, the way they speak and what they say and how the woman keeps repeating "this night of all nights". The next stage of tension is the journey to the red room the passages and spiral staircases that would be expected in a gothic mystery. The journey prepares the narrator for what he might experience in the red room, it is a taster of what is too come. "They seemed to belong to another age... when omens and witches were credible and ghosts beyond denying", the narrator has given the object human properties using personification. The people he met before and the objects he sees now, seemed to him, to belong to a time in history when witches were believed to exist and if any one were accused they would be prosecuted. "A shadow came sweeping after me, and one fled before me in the darkness overhead" the narrator is seeing what he believes to be shadows, the weird people he spoke to earlier had an influence on him and this has made him feel more doubtful and wary. ...read more.

The short sentences also add to the already mounting tension. This paragraph is the most tense part of the story it uses personification, metaphors, similes and short sentences to add more tension, this is what makes it a classic mystery, a gothic mystery. "Ocean of mystery" an ocean is massive and if the red room contains an ocean of mystery it must be big there is lots to find out about the room. In conclusion the story has done what is was set out to do, create tension. It has done this by making the reader think about what might happen next and makes them jump to conclusions about what might happen. The descriptions of the characters tells us what they look like and how they speak and this is makes the story more believable and interesting. The language used brings the story alive in the mind of the reader and this makes the story more interesting. Kamlesh Vadukul 7/2/02 10 set 2 English ...read more.