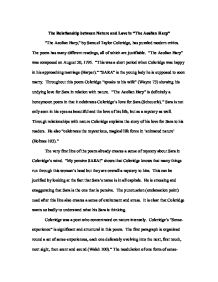 The Relationship between Nature and Love in

The Relationship between Nature and Love in "The Aeolian Harp" "The Aeolian Harp," by Samuel Taylor Coleridge, has puzzled modern critics. The poem has many different readings, all of which are justifiable. "The Aeolian Harp" was composed on August 20, 1795. "This was a short period when Coleridge was happy in his approaching marriage (Harper)." "SARA" is the young lady he is supposed to soon marry. Throughout this poem Coleridge "speaks to his wife" (Wayne 73) showing his undying love for Sara in relation with nature. "The Aeolian Harp" is definitely a honeymoon poem in that it celebrates Coleridge's love for Sara (Scheuerle)." Sara is not only seen in his eyes as beautiful and the love of his life, but as a mystery as well. Through relationships with nature Coleridge explains the story of his love for Sara to his readers. He also "celebrates the mysterious, magical life force in 'animated nature' (Holmes 103)." The very first line of the poem already creates a sense of mystery about Sara in Coleridge's mind. "My pensive SARA!" shows that Coleridge knows that many things run through this woman's head but they are overall a mystery to him. ...read more.

Nature survives and functions without any help from man. This same principle of no human aid is seen in how the Aeolian Harp is played. There for the Aeolian Harp is another mystery of nature in the eyes of Coleridge. To add to this thought the title of the poem also portrays that same sense of mystery with nature. "Although the poem's title indicates an instrument fit for gods only, the actual instrument in the poem is "that simplest Lute" placed lengthways in the casement (Radley 45)." A lute is played the same way as the Aeolian Harp is played. The two instruments are very similar and extremely simplistic. "Here again the simplicity of the actual instrument is analogous to the simplicity and reality inherent in the beanfield image. The lines of the poem move as smoothly here as does the breeze across the lute (Radley 45)." "The Aeolian Harp" is primarily "a beautifully modulated mental excursion, a musing on life, love and religion, with the Aeolian Harp as its central and multifunctional symbol. The harp, an instrument played on by the wind and a favourite plaything of Romantic writers, who saw it as a metaphor for poetic inspiration... ...read more.

The "him" that Coleridge is referring to is understood to represent God. He has discovered all these things that Christ had done for him like healed him when he was sick even though he was a "sinful and most miserable man." The biggest reason of all that Coleridge has become one with his faith is because Christ helped him to posses the place where he lived, which was his Cot, peace, and above all Sara. "The Aeolian Harp" is a poem of mystery and nature. Coleridge appears to be fascinated with the different relationships and senses that nature effects. Above all this poem was written to Sara telling her that he loves her and views her as a magical mystery. Just like what he believes about nature. Coleridge is utterly trying to compare the mysteries of nature to the mystery of love. Both nature and love are not created by humans. Both occur naturally and without any warning. This is the whole reason why Coleridge loves Sara so much, because she is a mystery to him just like nature. He is a philosopher so the things that he doesn't understand about Sara excite him and make him want to understand. Overall, "The Aeolian Harp" can be called a love poem to Sara in relationship to the mystery of nature. ...read more.