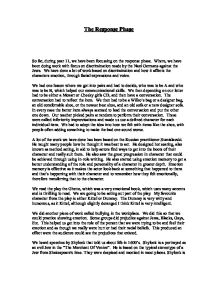 The Response Phase So far, during year 11, we have been focussing on the response phase. Where, we have been doing work with focus on discrimination made by the Nazi Germans against the Jews. We have done a lot of work based on discrimination and how it affects the characters emotion, through facial expressions and voice. We had one lesson where we got into pairs and had to decide, who was to be A and who was to be B, which helped our communicational skills. We then depending on our letter had to be either a Mozart or Cheeky girls CD, and then have a conversation. The conversation had to reflect the item. We then had to be a Wilko's bag or a designer bag, an old comfortable shoe, or the newest best shoe, and an old sofa or a new designer sofa. In every case the better item always seemed to lead the conversation and put the other one down. ...read more.

We read the play the Ghetto, which was a very emotional book, which uses many accents and is thrilling to read. We are going to be acting out part of the play. My favourite character from the play is either Kittel or Dummy. The Dummy is very witty and humorous, as it Kittel, although slightly deranged I think Kittel is very intelligent. We did another piece of work called bullying in the workplace. We did this so that we could practice showing emotion. Some groups did prejudice against Jews, Blacks, Gays, Etc. This helped us get into the role of the person that we were trying to be and feel their emotion and as though we really were hurt or had their racial beliefs. This produced an effect were the audience could see the prejudices that existed. We heard speeches by Shylock that told us about life in 1600's. Shylock is a portrayed as an evil Jew in the "The Merchant Of Venice". ...read more.

We then did an exercise where all the people with blue eyes were allowed Haribo sweets along with the right to order all the people with different coloured eyes to do what they want. This would be, what it was like with the Germans. When we did this exercise some people didn't feel right about ordering their friends, which was probably also similar, as I doubt all the Germans that hated Jews. This had a very strong effect on everyone and made us think of what life was like for Jews. We also did a monologue or in-role writing which you can read on the separate piece of paper. It shows some of the emotion involved in being bullied. This phase has helped me develop a better understanding of the character that I am given in plays. It has also boosted my confidence and helped me learn ways of expressing emotion, when acting. In my piece of in-role writing, my character feels upset and angry with the bullies. The desired effect I have from the in-role writing is that the reader will pity and feel sorry for David. ...read more.