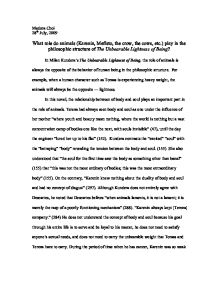 The role of animals in The Unbearable lightness of being

Medora Choi 28th July, 2009 What role do animals (Karenin, Mefisto, the crow, the cows, etc.) play in the philosophic structure of The Unbearable Lightness of Being? In Milan Kundera's The Unbearable Lightness of Being, the role of animals is always the opposite of the behavior of human being in the philosophic structure. For example, when a human character such as Tomas is experiencing heavy weight, the animals will always be the opposite --- lightness. In this novel, the relationship between of body and soul plays an important part in the role of animals. Tereza had always seen body and soul as one under the influence of her mother "where youth and beauty mean nothing, where the world is nothing but a vast concentration camp of bodies one like the next, with souls invisible" (47), until the day the engineer "lured her up to his flat" (152). Kundera contrasts the "excited" "soul" with the "betraying" "body" revealing the tension between the body and soul. (155) She also understood that "the soul for the first time saw the body as something other than banal" (155) that "this was not the most ordinary of bodies; this was the most extraordinary body" (155). ...read more.

The look that Karenin gave was not just a loyal and dutiful look, it was a stare. The most frightening thing was "he did not look that way at Tomas" (300), but only at her. "it was not a desperate look, or even sad" (300). "It was a look of awful, unbearable trust. The look was an eager question. All his life Karenin had waited for answers from Tereza, and he was letting her know that he was still ready to learn the truth from her" (300). This stare proved that Tereza taught Karenin how to love and learn, to have an inner soul inside the body that came out the dying body; hence, she had filled in his empty space. It happens again when Tereza named a heifer, and it is a human being's advantage to grant souls to animals, because "having a name is a sign of a soul" (290). Therefore, once Tereza named her Marketa, a soul comes along as a side order, building up their relationship to the next level. Throughout the novel "weight" exemplifies characteristics of humans; whereas "lightness" reflects qualities similar to those of animals. ...read more.

When Tereza see the crow buried alive, it represents weakness, reflecting Tereza's own fate, for she is always drawn to weakness. Tomas and Tereza have never believed in eternal return, so their lifetime goal is to march onward, and make progress. On the other hand, Karenin has always committed to a happy weightless routine. As the novel comes to the end, they each once again learn from each other, Tomas and Tereza move to the country where "it was a harmonious world; everyone came together in one big happy family with common interests and routines" (282). It proves that their contradictions connect to each other, which make them a happy family. Through this novel, animals demonstrate their status and present the role often as opposites of the human beings in order to fill in the missing gaps. Kundera first show how human beings have souls while animals have none; he then show how human beings define weight whilst animals are as light as a feather; following up by human beings as strength opposing to animals as weakness; lastly, he makes a point that human beings only march onward while animals go around the cycle, eternally returning to their routines. Hence, the role of the animals is the opposite of the behavior of the human beings. ...read more.

In sections of this essay some very good points are made; however in some paragraphs there are too many quotes that just follow one another without being explained. Using specific textual references is very important but they need to support points and then be explained rather than just listed.