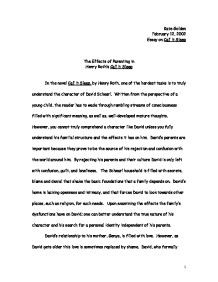 The Role of Parenting in Henry Roth's Call it Sleep

Kate Golden February 12, 2002 Essay on Call it Sleep The Effects of Parenting in Henry Roth's Call it Sleep In the novel Call it Sleep, by Henry Roth, one of the hardest tasks is to truly understand the character of David Schearl. Written from the perspective of a young child, the reader has to wade through rambling streams of consciousness filled with significant meaning, as well as, well-developed mature thoughts. However, you cannot truly comprehend a character like David unless you fully understand his familial structure and the effects it has on him. David's parents are important because they prove to be the source of his rejection and confusion with the world around him. By rejecting his parents and their culture David is only left with confusion, guilt, and loneliness. The Schearl household is filled with secrets, blame and denial that shake the basic foundations that a family depends on. David's home is lacking openness and intimacy, and that forces David to look towards other places, such as religion, for such needs. Upon examining the effects the family's dysfunctions have on David; one can better understand the true nature of his character and his search for a personal identity independent of his parents. ...read more.

David's rejection of his mother's world and her inability to understand his world force David to look for fulfillment and acceptance outside the home, in school, religion and with street kids like Leo. Genya is a weak woman and her subordinate status in the household cannot protect David from his domineering and abusive father. Although little is known about Albert before the novel begins it is clear that he is a bitter character filled with resentment. Albert's marriage was disrupted when he left for America almost immediately after the wedding. This speedy departure lead Albert to question David's legitimacy as his true son, building up a resentment for both wife and child. Once in America, Albert is forced into low paying monotonous jobs available to immigrants. This pressure ruins Albert and corrupts his relationship with his family, whom he blames. Albert rejects society and the lack of opportunities it presents him. Albert always feels like an outsider, as if everyone is out to get him. David's father refuses to assimilate in any way to the modern world around him. At home David fears the return of his father from work because he feels "the necessity of continually humbling himself before the relentless, unwinking scrutiny of those eyes, the grey unrelaxing visage (178)." ...read more.

When David lies about the death of his mother he is staking a claim on his independence. David sees his previous attachment to his mother as interfering with his assimilation into American culture. David is torn between love and shame; and his search for independence alienates him further from his parent's immigrant identity. David's search for a personal identity, independent of his parents, becomes clear upon examining the relationship he has with his parents. The Schearl's dysfunctional household has a long term and lasting impact on David. The way David approaches life and the different situations he is faced with is a direct result of his rejecting his mother and father's culture and their refusal to assimilate to the modern American culture that David is growing up in. David wants to fit in and feel accepted. He doesn't find this at home and he is forced to search outside of the home, unfortunately this too is unsuccessful. David's independence and strength to look outside the home for happiness is a result of his inability to connect with his parents on an emotional and meaningful level. The true nature of David's character is truly made clear when the effects that his familial structure has on him is examined. 1 ...read more.