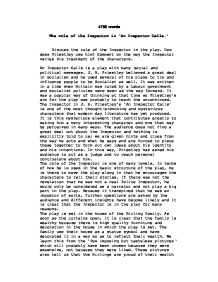 The role of the Inspector in 'An Inspector Calls.'

4786 words The role of the Inspector in 'An Inspector Calls.' Discuss the role of the Inspector in the play. How does Priestley use him? Comment on the way the Inspector varies his treatment of the characters. An Inspector Calls is a play with many social and political messages. J. B. Priestley believed a great deal in socialism and he used several of his plays to try and influence people to be Socialist as well. It was written in a time when Britain was ruled by a Labour government and socialist policies were seen as the way forward. It was a popular way of thinking at that time so Priestley's aim for the play was probably to teach the unconvinced. The Inspector in J. B. Priestley's 'An Inspector Calls' is one of the most thought-provoking and mysterious characters that modern day literature has yet produced. It is this mysterious element that contributes greatly to making him a very interesting character and one that may be perceived in many ways. The audience does not find a great deal out about the Inspector and nothing is explicitly told to us; we are given hints and clues from the way he acts and what he says and are forced to piece these together to form our own ideas about his identity and his intentions. In this way, Priestley has asked his audience to act as a judge and to reach personal conclusions about him. The role of the Inspector is one of many levels. In terms of how he is used in the basic structure of the play, he is there to move the play along in that he encourages the characters to tell their stories. If there was not the revelation that he was not a real Police Inspector, he would only be considered as a narrator and not play a big part in the play. ...read more.

But if you're easy with me, I'm easy with you.' When Gerald tells his story, he is questioned mainly by Sheila who is angry with Gerald for betraying her. The Inspector treats Gerald with neither fondness nor contempt. He observes that 'he at least had some affection for her and made her happy for a time.' Mrs. Birling is not present for the majority of the questioning, so she is unfamiliar to the Inspector's abruptness. She describes him as 'a trifle impertinent'. She, like Arthur Birling, seems to be used to receiving nothing but respect. This is because she is of a high-middle class. The Inspector treats the characters with the same disregard as they gave Eva Smith. Mrs. Birling becomes increasingly annoyed at how the Inspector treats her. This is shown when the Inspector says, 'You're not telling me the truth', and she replies 'I beg your pardon!' She seems horrified by the way she reacts that somebody could speak in that way to a lady of her class. Like her husband, Mrs. Birling refuses to accept any responsibility for the death of Eva Smith. Protective of her family, she does not criticise any of them either, but turns all of the blame onto the unidentified man: the father of Eva's child. She very happily says that the man should be 'dealt with very severely' and made to 'confess in public his responsibility,' oblivious to what most of the audience would have realised; that Eric was the father. This is another example of irony. She believes that the man must be someone who is working-class and has not been brought up properly because he was a drunk and guilty of theft. Eric seems to see the Inspector as the strong father figure that is missing from his life. He said that Birling was 'not the kind of father a chap could go to when he's in trouble' so he is obviously not close to him. ...read more.

The war did break down barriers between classes and people had to all work for the country, not for personal gain, so what the Inspector spoke of was accurate. I think Priestley used the idea of war to convey his message because it was a major issue when the play was written and everyone would have suffered from it and would care greatly about it. The play finishes with a telephone call from the police saying that 'A girl has just died.... after swallowing some disinfectant' and a real Inspector will question the family. This is an unexpected twist. The fake Inspector was there to punish them on a moral level and to try and make them feel guilty enough to change their behaviour. This was accomplished with Eric and Sheila, but not with the others. The only thing that they would be affected by was a 'public scandal,' and the real Inspector would ensure that that is what they would get. Without this twist, it would seem that the Birling parents and Gerald would escape unpunished. One must conclude that the Inspector's main purpose is to teach. In the context of the play, he told the characters what had happened to a particular girl because they had each been guilty of selfishness. In regards to the whole of society, he voiced Priestley's opinions that we cannot make any progress if we do not work together. In my opinion, those watching or reading the play today would not gain as much from the story in regards to the moral teachings because most have now accepted the advantages of Socialism over Capitalism and so do not have as much to learn on the arguments of this issue as the audiences of 1947. In regards to the question of what the Inspector actually was, I personally feel that there is not enough evidence given for even a strong, fact-supported theory to be produced to answer the question, let alone an infallible answer. John Boynton Priestley ...read more.