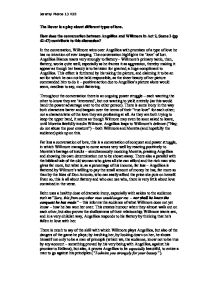 The Rover is a play about different types of love. How does the conversation between Angellica and Willmore in Act 2, Scene 2 (pp 42-47) contribute to this discussion?

The Rover is a play about different types of love. How does the conversation between Angellica and Willmore in Act 2, Scene 2 (pp 42-47) contribute to this discussion? In the conversation, Willmore wins over Angellica with promises of a type of love he has no intention of ever keeping. The conversation highlights the 'love' of lust. Angellica Bianca reacts very strongly to flattery - Willmore's primary tactic, then, flattery, works quite well, especially as he frames it as aggression, thereby making it appear as though her beauty is to be taken for granted; a huge compliment to Angellica. This effect is furthered by his taking the picture, and claiming it to be an act for which he can not be held responsible, as the sheer beauty of her picture commanded him to do it - positive action due to Angellica's picture alone would seem, needless to say, most flattering. Throughout the conversation there is an ongoing power struggle - each wanting the other to know they are 'interested', but not wanting to yield entirely (as this would hand the power advantage over to the other person). ...read more.

This creates humour when they almost walk out on each other, but also proves the shallowness of their relationship; Willmore wants sex, and in a very childish way, Angellica responds to his flattery by thinking that he's fallen in love with her. There is much to say of the skill with which Willmore plays Angellica, but also of the dangers of the game he plays; by insulting her, by looking down on her, he shows himself not only to be a man of principle (which we, the audience, know not to be true by any account - something proved by his very being with Angellica, against his promise to Hellena), but also, it proves Angellica to be especially beautiful, to entice a man to go against his principles ("I admire you strangely for your beauty"). Willmore's honesty is not only bizarre, but also, one would assume, ill-considered, when he actually informs Angellica that "the flames [my heart] feels are but so many lusts...for had it been the purer flame of love...", basically informing her that he does not love her, it is merely lust. ...read more.

The love expressed between these two is no more than mutual lust and using, and Behn is using this to show the differences between this and what she sees to be real love, that of Belvile and Florinda. Throughout the play, Willmore tries to bed every woman he sees, no matter what he promises, and then accuses women of being to chaste with him; Angellica goes from not being able, in her estimation, to fall in love, to thinking she's in love with Willmore, to pointing a gun at his chest. This conversation is a microcosm of their whole relationship, and of every relationship that Willmore has - it nothing more than an exchange, a bartering for sex. Willmore, who stands for lust, is constantly getting in the way of the love which Belvile and Florinda have for each other, and is thus a metaphor for lust itself - therefore this conversation illustrates the lows to which lust will travel in order to get what it wants, in order to satiate itself, if only temporarily. Jeremy Pierce 13 HJB ...read more.