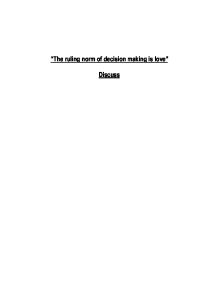 "The ruling norm of decision making is love" Discuss In 1863 Jeremy Bentham created the theory of Utilitarianism, a theory which later would be further developed John Mill. This theory was based on the function of how to make a decision that consequently founded in both pleasure and happiness. But in 1966 Joseph Fletcher wrote a book entitled Situation Ethics1. In it he described a new method of decision making in a moral dilemma, he suggested using the method ????? Love, "In Fletchers eyes, love replaces Bentham's and Mill's idea of pleasure: we now act to cause love rather that pleasure." Mitchell2 The formation of Situation Ethics was argued by Fletcher to be halfway in-between normative/legalism (set out rules of behaviour to be applied in a particular moral situation) and antinomian (without rules). He argued that a situations would have pre determined rules of conduct for particular moral dilemmas, but is prepared to set theses aside if ????? seems to be a better option. He based his theory around four working principles and six fundamental propositions. ...read more.

It is selfless love cornered and applied to all others, irrespective of who they are or what they have done. "An agapistic approach (Such as that of Hare) asserts that to promote full use of the Golden Rule it is necessary to rely and take into consideration the interests of others." Mitchell By allowing this idea it makes it a universally applied theory for love is engaged in many cultures all over the world. Thereby making it flexible, practical and easy to understand while still continuing to take into account the complexities of human life. This brings me onto my next point Situation Ethics enables a rational and emotional response to determine what is right in any given situation. But this weakens the theory as well as strengthening it. The strength can be seen in light of how an agent is no longer restricted by law or rules for, "Situation Ethics present's humans with a great degree of freedom"3. An agent doesn't have to follow a moral rule if it goes against their deepest sense of love. ...read more.

Furthermore has Fletcher taken into consideration that you expect an agent to have some sense of morally correct behaviour, which in some cases, moral reason may demand something that goes against one's immediate feelings but which in the wider scheme of things might be seen as right, "Love is short sighted and delusive in the eyes if a moral."6 For even though Fletcher has a with standing point with Situation Ethics and ????? Love, it's quite apparent that most ethical dilemmas offer an obvious course of action without resorting to Situationalism. Thus I now shall conclude my final points. I felt that Situation Ethics, is not necessarily a great device for making decision, it still hold some engraved points that are more relevant than what was given credited for. I think that the real weakness lies in that in relating the theory in practice for it doesn't offer the potential that it does theoretically. We view people in light of their better nature, not their worst, 1 http://www.geocities.com/tim/Situation.html 2 B. Mitchell, Situation Ethics, Pg 352 3 W. Barclay, Ethics in a Permissive Society, P80 4 http://www.geocities.com/tim/Situation.html 5 Gstz, Ignacio L., 'Is Fletcher situationism Christian?' Scottish Journal of Theology 23 (3), August 1970,P 273-278 6 R. Higginson Dilemmas ...read more.