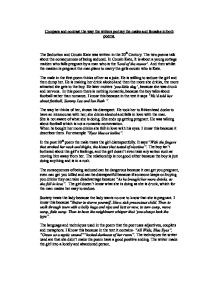 The Seduction and Cousin Kate mpare and contrast the way the writers portray the males and females in both poems.

Compare and contrast the way the writers portray the males and females in both poems. The Seduction and Cousin Kate was written in the 20th Century. The two poems talk about the consequences of being seduced. In Cousin Kate, It is about a young cottage maiden who falls pregnant by a man who is the 'Lord of the manor'. And then whilst the maiden is pregnant the man plans to marry the girls cousin who is Kate. The male in the first poem thinks of her as a joke. He is willing to seduce the girl and then dump her. He is making her drink alcohol and then the more she drinks, the more attracted she gets to the boy. He later mutters 'you little slag', because she was drunk and nervous. ...read more.

The relationship is not good either because the boy is just doing anything and is in a rush. The consequences of being seduced can be dangerous because it can get you pregnant, even can get you killed and can be disrespectful because if someone keeps on buying you drinks they can take disadvantage because "As he brought her more drinks, so she fell in love". The girl doesn't know what she is doing as she is drunk, which for the man makes her easy to seduce. Society treats the lady because the lady wants no one to know that she is pregnant. I know this because "Better to starve yourself, like a sick precocious child. Than to walk through town with a belly huge and ripe and better now, to turn away, move away, fade away. ...read more.

The girl's life has also been ruined as she has got pregnant at a young age. As she is 16 years of age she should do normal things a teenager would do, like spend time with friends and having fun. "For where now, was the summer of her sixteenth year, "We were in the photographs of the summer day trips to Blackpool, jumping on all the rides." As a Result, in the poem 'The Seduction', the girl reads teen magazines and reads about relationships on boys/girls and your relation should last for a long time. She decides to follow what the magazine tells her and it all ends up into a nightmare, because she just ends up getting pregnant at Birkenhead docks whilst she is drunk. A poem or even a story normally ends in a happy way but this ends up being all wrong and she is feeling bad about the situation. ?? ?? ?? ?? ...read more.