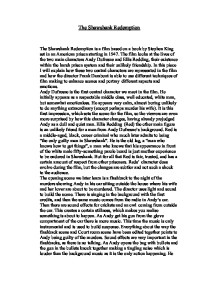 The Shawshank Redemption The Shawshank Redemption is a film based on a book by Stephen King set in an American prison starting in 1947. The film looks at the lives of the two main characters Andy Dufresne and Ellis Redding, their existence within the harsh prison system and their unlikely friendship. In this piece I will explain how these two central characters are represented in the film and how the director Frank Darabont is able to use different techniques of film making to enhance scenes and portray different aspects and emotions. Andy Dufresne is the first central character we meet in the film. He initially appears as a respectable middle class, well educated, white man, but somewhat emotionless. He appears very calm, almost boring unlikely to do anything extraordinary (except perhaps murder his wife). It is this first impression, which sets the scene for the film, so the viewers are even more surprised by how this character changes, having already prejudged Andy as a dull and quiet man. Ellis Redding (Red) the other main figure is an unlikely friend for a man from Andy Dufresne's background. Red is a middle-aged, black, career criminal who much later admits to being "the only guilty man in Shawshank". He is the old lag, a "man who knows how to get things", a man who knows that his appearance in front of the white male fifty-something parole board is just another experience to be endured in Shawshank. But for all that Red is fair, trusted, and has a certain amount of respect from other prisoners. Reds' character does evolve during the film, but the changes are subtler and not such a shock to the audience. ...read more.

It is obvious that he is very nervous as he doesn't know what to do with his hands and he fiddles with his hat. A man on the parole board tells him to "sit" just like you would speak to a dog! The director again uses close up shots of the parole board chairman to show his position of power, and wider shots of Red to show his lowly situation as a prisoner. The men on the parole board make Red feel that they are superior to him because they have control over his life. Red speaks to the parole board with respect calling them "sir". Although polite, it seems that Red is just coming out with phrases he has learned over the years, the answers he is expected to give. He says all the right things but from his body language, the audience knows that he will be rejected. He looks up at the walls for a few seconds then down at the ground just before they stamp "REJECTED" on his record. As he walks up the steps to the exercise yard he changes completely. At the bottom of the steps he is depressed and upset that he is going to be stuck in prison for at least another ten years but when he gets further up the steps he starts swinging his arms and gets more spring in his step and becomes self-confidant, he is back in control of what happens to him, within the prison at least. The first view of the yard is very blue, the prisoners are wearing blue uniforms, the sky is a blue shade of grey and so are the walls of the buildings that trap all the prisoners inside. ...read more.

Andy knows Red is "a man that knows how to get things" and wants him to get a rock hammer; so that he can take up an old hobby, geology. Red is full of questions about this because it would be a dangerous thing to smuggle into a prison and could be used as a lethal weapon. He also warns Andy about "the sisters" the inhumane bull queers, who have taken a liking to him. Andy is shown to be naive, thinking that telling them he was not homosexual would make a difference. Red tells him to grows eyes in the back of his head and that he shouldn't use the rock hammer on them and if he tells anyone where he got it from they never do business again "not for shoelace or bit of gum". This first conversation sets down some rules between the two characters and clearly outlines their positions in the prison community, with Red having some power amongst prisoners and Andy having none. This is important to show the contrast later in the film. The beginning of the story gives no real indication of what is to come. The ways that the characters change is almost by accident and as a result of a set of circumstances in which both men play a part, the re-tarring of a roof. Red uses his influence and bribing of a guard to get his friends the job out on the roof, and Andy takes an opportunity to give the Captain of the guard some financial advice in exchange for beer for his 'co-workers'. This is the start of a shift in positions for both men, and drives the story forward in a different direction. ...read more.