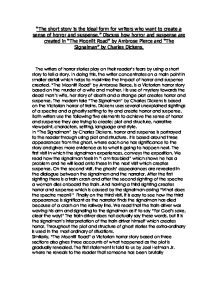 "The short story is the ideal form for writers who want to create a sense of horror and suspense." Discuss how horror and suspense are created in "The Moonlit Road" by Ambrose Pierce and "The Signalman" by Charles Dickens. The writers of horror stories play on their reader's fears by using a short story to tell a story. In doing this, the writer concentrates on a main point in smaller detail which helps to maximize the impact of horror and suspense created. "The Moonlit Road" by Ambrose Bierce, is a Victorian horror story based on the murder of a wife and mother. His use of mystery towards the dead man's wife, her story of death and a strange plot creates horror and suspense. The modern tale "The Signalman" by Charles Dickens is based on the Victorian horror of trains. Dickens uses several unexplained sightings of a spectre and a ghostly setting to try and create horror and suspense. Both writers use the following five elements to achieve the sense of horror and suspense they are trying to create: plot and structure, narrative viewpoint, characters, setting, language and style. In "The Signalman" by Charles Dickens, horror and suspense is portrayed to the reader through using plot and structure. It is based around three appearances from the ghost, where each one has significance to the story and gives more evidence as to what is going to happen next. The first visit in which the signalman experiences, conveys the exposition. We read how the signalman feels in "I am troubled" which shows he has a problem and he will lead onto these in the next visit which creates suspense. On the second visit, the ghosts' appearances are revealed in the dialogue between the signalman and the narrator. After the first sighting there is a train crash and after the second sighting of the spectre a woman dies onboard the train. ...read more.

They were slow, hesitant, uncertain," which gives a sense of the unknown. "I even thought that I must have left the hall lamp burning and the groping of this creature proved it a monster of the night," reveals to us how she will never understand what her husband did, she will always be deceived. We also read how she still feels great love for her husband even though he murdered her "where I had been so cruelly changed to what I am" and how she has her desire to meet her husband again. In "The Signalman" we read much about his character and the type of person he seems to be. We learn perhaps "that he had been well educated," and "he had been, when young a student of natural philosophy, and he had attended lectures." The narrator of this story though tells us how he can't believe a man with such intelligence and capability is "sitting in that hut," when he is able of much more. Yet we read of his time spent 'sitting in that hut,' that in his own time and by himself he was able to teach himself a language of words and phrases, and algebra in mathmatiques. Throughout the story we read that the signalman was a very lonely man. He was thought to have been a "contented man" and in reading, it is easy to gather he never seems to have a lot of company or friends visiting him in his 'hut' and place of work. As the signalman was lonely, perhaps he was only imagining the spectre as an object to keep him occupied, he was only seeing things. Yet, "By this time you will fully understand, sir" he said, "that what troubles me so dreadfully is the question, What does the spectre mean?" may leads us to believe that he wasn't only imagining this ghost as he was trying to convince the narrator to believe in it also and watch for its appearance. ...read more.

Firstly, the words "dead of the strangulation by human hands" gives us a horrific image to the death of his mother. It is a sight which would not want to be seen by many. Similarly in the second statement, by Caspar Grattan, "always and everywhere haunted by an overmastering sense of crime in punishment of wrong and of terror in punishment of crime," brings to us the realization that death is brutal. There is no nice way of describing death and the word 'terror' brings it home to us. Yet, the most descriptive language can be seen in that of the third statement told through a medium of the late Julia Hetman. Presenting her life as a ghost, we are told how things of the after-life are that of forbidden. The repetition of the word 'no' in "though for us it holds no sunlight, no warmth, no music, no laughter, no song of birds, nor any companionship" creates horror for the reader. When you die there is no going back, and we can sympathize with her even though she is dead as we read that even when her son dies, he will be a ghost like her but they will have no communication in "I have never been able to impart a sense of my presence. Soon, he, too, must pass to this Life Invisible and be lost to me forever." In reading these two short stories, "The Signalman" by Ambrose Bierce and "The Moonlit Road" by Charles Dickens, there is a twist in the tale in both. In "The Moonlit Road" it is that Julia will never know who murdered her, and in "The Signalman" there are unanswered questions - things left unresolved. Personally I preferred the story "The Moonlit Road" by Charles Dickens as it was easier to understand and analyze the focus points in the story. It gave a more detailed descriptions of the events which took place and the horror and suspense was created to maximize impact on a larger scale. ...read more.