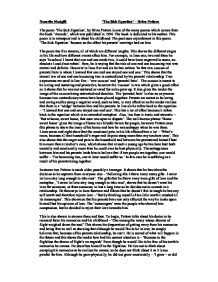 Namrita Modgill 'The Sick Equation' - Brian Pattern The poem 'The Sick Equation', by Brian Pattern is one of the many poems which comes from the book 'Armada', which was published in 1996. The book is dedicated to his mother. This poem is in retrospect and is about his childhood. The poet uses enjambment in this poem. 'The Sick Equation' focuses on the effect his parents' marriage had on him. The poem has five stanzas, all of which are different lengths. This shows the different stages in his life and how different events affect him. For example, in lines one, two and three he says 'In school I learnt that one and one made two, it could have been engraved in stone, an absolute I could not refute'. Here, he is saying that the rule of one and one becoming two was eternal and definite. However in lines five and six he has written 'In that raw cocoon of parental hate is where I learned that one and one stayed one and one.' This shows that the eternal law of one and one becoming two is contradicted by his parents' relationship. ...read more.

This shows us that his parents have not only affected the way he looks upon himself but his opinion of love. The 'messengers' were the people who showed him compassion, but he decided to reject their love towards him. This is also shown in stanzas three and four. To begin, Pattern talks about his desire to be released form his memories and his childhood - 'One among the many whose dreams of flight weighed down the soul' This shows his desperation of getting away from his memories and being free as well as showing that although he would like to be in love, he simply believes that, because of his parents relationship, he can't. He is scared of what will happen in the future and this shows the reader how bad his current situation is - 'Because to the flightless the dream of flight's an anguish' Even though he would like to be free of his terrible memories he cannot. He describes himself as the flightless. He ties not to think about escaping his memories as he realises he cannot, so he does not think about it as it is too painful for him. ...read more.

It is also the breaking of the cycle in which he was unhappy. There is also an irregular verse length which shows the different stages in his life and how he is feeling. The first stanza of the poem gives the reader the history of his parents' relationship and how he was affected by it as well as showing the reader the cause of his 'disease'. The second, third and fourth stanza are about his feelings as he gets older and the final stanza shows the reader how he has changed and what he feels at the present time. The poem has a very sad and depressing tone however; this is changed at in the last stanza, due to him possibly finding love. The atmosphere becomes uplifting and happy because he has learned that he should not suffer because of the mistakes his parents made. I think that the purpose of the poem is to try to convince the reader that Pattern is right about love and relationships. The title 'The Sick Equation' gives the reader the image of the equation of one and one, in terms of a relationship, to be destructive and wrong. ...read more.