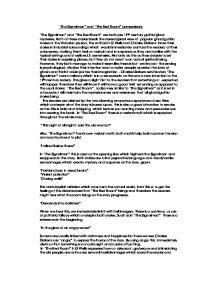 "The Signalman" and "The Red Room" comparisons "The Signalman" and "The Red Room" are both pre 19th century gothic/ghost mysteries. Both of these stories break the stereotypical view of popular ghost/gothic stories of the Victorian period, the authors H.G Wells and Charles Dickens base their stories in industrial surroundings which would immediately confuse the readers of their uniqueness, making them feel un-certain and in suspense as they are familiar with the typical settings and storylines I.E cemeteries, Not only do the authors decide to set their stories in surprising places, but they do not create an actual spiritual being. However, they both manage to make it seem like there is but we find out the ending is psychological. Maybe their intention was to make people question the idea of ghosts and think it could just be their imagination. Charles Dickens sets his story "The Signalman" near a railway which is in a sense ironic as this was a new invention to the 19th century society. This gives a slight hint to the readers that something un-expected will happen therefore they will know it will have a good twisted ending as opposed to the usual stories. ...read more.

The colours used in this story all help to personify evil. Red and black are constantly used throughout the story which underpin the mystery and is symbolic through light to dark. "Glance of his red eyes" "Red light" "The sombre reds and blacks of the room troubled me; even with seven candles the place was merely dim" This shows that even light, which could symbolise holiness and the idea of God's light helping to exercise the evilness but we get the sense that the room is greatly troubled and cannot be saved. The colour black is linked with the idea of death, the plague and darkness this gives us an un-earthy feeling combined with warning and evilness that the colour red brings which gives off how disturbed it is. As well as the idea of colours being used, there is a strong use of shadows in "The Red Room" which shows unease and a forbidding figure. This helps to make the ghost seem more alive and living as the shadows are seen sweeping which is a form of movement. "The echoes rang up and down the spiral staircase, and a shadow came sweeping up after me, and one fled before me into the darkness overhead" In "The Signalman" we learn about the signalman's past. ...read more.

As we establish the fact that there was nothing haunting the room we wonder what happened to the old people and was it the room that had an effect on them. I think that Wells had deliberately made the people old as he knew it was easier to make old people look grotesque as the elderly are fragile and wrinkly looking, therefore he took the chance to make them have distorted features to fuel the suspense and tension of the story. Wells has done a good job by maintaining the emotions of all stereotypical ghost/gothic stories because he has used archaic language which would have been appropriate for the Victorian society and because of the excellent visual images which help readers to picture the terror quicker. Readers would enjoy being scared and might be relieved towards the end because the ending twists everything by revealing there was clearly nothing. In "The Signalman" it has a very similar ending. Dickens uses the idea of fear being the fuel of the story. The signalman dies from fear which Dickens tells us it is "infection of the mind". Dickens maintains the gothic/ghost storylines as he decides to kill the anonymous eponymous hero at the end and in most typical stories they include ghostly deaths. ...read more.