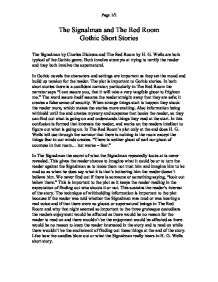 The Signalman and The Red Room

The Signalman and The Red Room Gothic Short Stories The Signalman by Charles Dickens and The Red Room by H. G. Wells are both typical of the Gothic genre. Both involve attempts at trying to terrify the reader and they both involve the supernatural. In Gothic novels the characters and settings are important as they set the mood and build up tension for the reader. The plot is important to Gothic stories. In both short stories there is a confident narrator; particularly in The Red Room the narrator says "I can assure you, that it will take a very tangible ghost to frighten me." The word assure itself assures the reader straight away that they are safe; it creates a false sense of security. When strange things start to happen they shock the reader more, which makes the stories more exciting. Also information being withheld until the end creates mystery and suspense that hooks the reader, so they can find out what is going on and understands things they read at the start. ...read more.

no ghosts or supernatural beings in The Red Room and why that night seemed so important to the three grotesque custodians the readers enjoyment would be affected as there would be no reason for the reader to read on and there wouldn't be the enjoyment would be affected as there would be no reason to keep the reader interested in the story and to read on while there wouldn't be the excitement of finding out these things at the end of the story. Like how the candles blow out or what the Signalman really hears in H. G. Wells short story. In The Red Room. H. G. Wells uses one of his characters to repeats the words "This night of all nights." The repetition of this phrase signifies a mysterious significance of what has happened on that day in previous times. This technique is used to create tension and suspense for the reader, to find out what was significant about that night and also scares the reader as there fears increase as the phrase is repeated so the reader see the significance more, this increases the readers fear of the room. ...read more.

What makes an effective gothic story is that the plot and setting have to be spooky, with the use of an isolated setting with gothic descriptive words like precipice. Also the use of techniques to build up tension and suspense result in an effective gothic story. Charles Dickens use of pathetic fallacy is effective as the weather mirrors emotions of the characters giving an understanding of how the characters are felling so when in The Signalman the weather was gloomy and dull this was how the signalman was felling and the reader knows what to expect from the character. The extent to which both authors achieved and effective gothic story is that H. G. Wells created a better mood and setting in The Red Room than Charles Dickens did in The Signalman, because he used a better setting with the castle and the subterranean passages being very gothic unlike the valley used in The Signalman. The one thing that did make this setting spooky is for the reader at the time of the stories publishing railways were new and very high tech so very many people were wary and afraid of them. ?? ?? ?? ?? Page 1/2 ...read more.