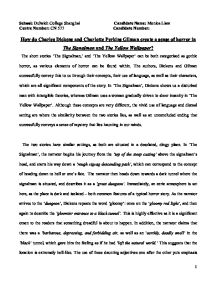 The Signalman and The Yellow Wall Paper

School: Dulwich College Shanghai Candidate Name: Monica Liaw Centre Number: CN 577 Candidate Number: How do Charles Dickens and Charlotte Perkins Gilman create a sense of horror in The Signalman and The Yellow Wallpaper? The short stories 'The Signalman,' and 'The Yellow Wallpaper' can be both categorised as gothic horror, as various elements of horror can be found within. The authors, Dickens and Gilman successfully convey this to us through their concepts, their use of language, as well as their characters, which are all significant components of the story. In 'The Signalman', Dickens shows us a disturbed man with intangible theories, whereas Gilman uses a woman gradually driven to sheer insanity in 'The Yellow Wallpaper'. Although these concepts are very different, the vivid use of language and dismal setting are where the similarity between the two stories lies, as well as an unconcluded ending that successfully conveys a sense of mystery that lies haunting in our minds. The two stories have similar settings, as both are situated in a desolated, dingy place. In 'The Signalman', the narrator begins his journey from the 'top of the steep cutting' above the signalman's head, and starts his way down a 'rough zigzag descending path', which can correspond to the concept of heading down to hell or one's fate. ...read more.

In 'The Yellow Wallpaper', we first learn that the narrator has a 'temporary nervous depression - a slight hysterical tendency', according to her doctor and husband. However, this deteriorates greatly when the narrator moves into the mansion and starts to perceive strange shapes on the wallpaper. 'The dim shapes get clearer every day' is a sign that the narrator is gradually falling into mental illness each day, as the peculiar shapes are actually only figments of her imagination. The dim pattern then gradually becomes regarded as a woman behind the monstrous pattern, and then more of them appear- some hidden in the wallpaper whereas others are seen creeping on the land outside her barred window. She believes that 'there are a great many women behind, and sometimes only one,' and claims that 'she crawls around fast, and her crawling shakes it all over'. The word 'crawling' is repeated many times within the story to develop the sinister mood, as it is usually creepy insects or mysterious creatures that crawl. Gilman then shows that the narrator had completely lost it when she had torn herself away from the real world, drowning into her own imaginary one. ...read more.

The story closes with her husband fainting from shock and the narrator's only intention was to 'creep over him every time'. The way that these two endings are intentionally left without being concluded is a powerful way of finishing the story, as we are left wondering about the aftermath of the story, with the haunting imageries still left in our minds which creates a sense of insecurity, and is how many horror stories successfully convey their sense of fear. In conclusion, although the two stories are both gothic stories, their authors create the eeriness through different concepts. Whilst Dickens uses a supernaturally horrific sense of atmosphere, Gilman uses a psychologically disturbing way to create a spine-tingling effect. The characters also differ as well - Dickens' signalman is haunting through the description of his physical features and supernatural encounters, whereas Gilman's narrator is perturbing through her insane hysterics and confusion between fact and fiction. The similarity however, lies in the use of language - both dark and detailed, the settings in which both are set in a dingy, desolated place, as well as the powerful endings that leave us readers with more inquiries after the story, as they are both left without a conclusion. ?? 1 ...read more.