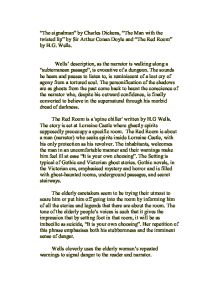 "The signalman" by Charles Dickens, "The Man with the twisted lip" by Sir Arthur Conan Doyle and "The Red Room" by H.G. Wells. Wells' description, as the narrator is walking along a "subterranean passage", is evocative of a dungeon. The sounds he hears and pauses to listen to, is reminiscent of a lost cry of agony from a tortured soul. The personification of the shadows are as ghosts from the past come back to haunt the conscience of the narrator who, despite his outward confidence, is finally converted to believe in the supernatural through his morbid dread of darkness. The Red Room is a 'spine chiller' written by H.G Wells. The story is set at Lorraine Castle where ghastly spirits supposedly preoccupy a specific room. The Red Room is about a man (narrator) who seeks spirits inside Lorraine Castle, with his only protection as his revolver. ...read more.

life, this is also the first time that he has ever set foot in the house and therefore hasn't experienced its inexplicable and supernatural activity before, "And eight and twenty years you have lived and never seen the likes of this house". The young protagonist begins to experience fear from the beginning because of what the old people have been revealing to him. He probably did have doubts about going there but did not want to show signs of infirmity in front of his social inferiors. There is an early indication of things not being all that they seem when the narrator's reflection in the mirror is abbreviated and broadened to an impossible sturdiness. H.G. Wells' vivid descriptions of the Gothic setting build up fear and tension- throughout the story. An early indication that there is more to the room than can be seen is when the narrator is preoccupied fortifying himself with another drink and is unaware that "A monstrous shadow of him crouched upon the wall and mocked his action as he poured and drank". ...read more.

The narrator is saying this sarcastically as he is feeling uncomfortable around the elderly people. More fear is built when he hears the woman by the fire repeatedly saying to herself "This night of all nights". This provides a clear indication that this particular night was the worst night to go to the room. This also gives a suggestion that it was the anniversary of the Duke that had died. Echoes are also another element that the narrator uses to induce fear in the atmosphere. Shadows are also another aspect Wells is using to convey fear. The narrator's mounting fear causes him to stop on the landing and listen carefully to see if he can detect any noise. When he finally opened the door, he stays out in the corridor and examines the room before he enters it "I began to walk about the room peering round each article of furniture". Wells also creates tension by using emotive and charged language. " ...read more.