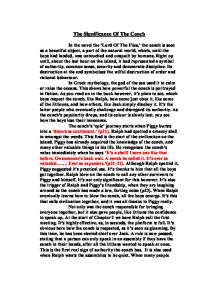 The Significance Of The Conch

The Significance Of The Conch In the novel the 'Lord Of The Flies,' the conch is seen as a beautiful object, a part of the natural world, which, until the boys had landed, was untouched and unspoilt by humans. Right up until, about the last hour on the island, it had represented a symbol of authority, common sense, security and democratic discipline. Its destruction at the end symbolises the wilful destruction of order and rational behaviour. In Greek mythology, the god of the sea used it to calm or raise the oceans. This shows how powerful the conch is portrayed in fiction. As you read on in the book however, it's plain to see, which boys respect the conch, like Ralph, how some just obey it, like some of the littleuns, and how others, like Jack simply disobey it. It's the latter people who eventually challenge and disregard its authority. As the conch's popularity drops, and its colour is slowly lost, you see how the boys lose their innocence. The conch's 'epic' journey starts when Piggy bursts into a 'decorous excitement.' (p21). Ralph had spotted a creamy shell in amongst the weeds. This find is the start of the civilization on the island. Piggy has already acquired the knowledge of the conch, and many other valuable things in his life. He recognises the conch's value immediately when he says 'It's a shell! I seen one like that before. On someone's back wall. A conch he called it. It's ever so valuable....... ...read more.

He talks of how all the boys are all just cry babies and sissies. Instead of easing their worries, he tries to bring them out. Ralph is astonished. Jack then turns his focus to the beast, and realises he has gone too far. At this stage, he still respects the conch. We know this because he cradles it constantly. All Jack doesn't do is respect the conch. This is evidently clear when Piggy is trying to speak, and the hunters are joking about him. All in all, the conch works well in the assembly. But just when you think it's over, a small boy called Phil put his hands out for the conch. The boy is described as confident in the book, so we now have proof, that, the conch gave the boys on the island confidence to speak. Not only does this chapter bring out Jacks true colours over the beast and ghosts, it also shows his true feelings for the conch. He is prepared to fight with Piggy for it on p112. This shows us, the readers, that the conch, at present, is, still respected be everyone, even the hunters, like Jack. And still, when Ralph lifts it, we can see that all the boys see it as authority. This authority seems to have lasted the whole assembly, until, at the bottom of p113; Jack starts to disobey the conch on a major scale for the first time. Piggy is trying to speak about his view on ghosts, and he is holding the conch, until abruptly, Jack butts in and shouts 'You shut up, you fat slug!' ...read more.

p222 is the last we see of the conch. The conch's last description is 'the fragile, shining beauty of the shell.'(p222). This sums up what the conch was very well, and without further ague, Roger leans on the rock release lever. The rock hits Piggy on the chin, and he falls, taking the conch with him, and both smash up, and get washed out to sea. The destruction of the conch symbolises how easily democracy can be overthrown. This is the end of humane civilization on the island, as from now on, all the boys are trying to kill Ralph. Jack even admits it himself, saying 'the conch is gone ??, you have no tribe anymore.'(p224). This speech tells us that Jack really thought that the conch was all that Ralph's tribe was good for, and that his leadership depended on it. Now it's gone, Jack declares himself the proper chief, and Ralph runs. It's kind of ironic how Piggy dies with the conch, as he is the only one who stood by it, and respected it 100%. He was the one who looked after it, and, really found it. The conch was under close scrutiny on the island, and it was always Piggy that looked out for its welfare. With the conch gone, there is no real symbol on the island, and on p228, Jack does something about it. He replaces it with a skull. This is something completely different to what the conch symbolised. This symbolises evil and destruction and really now, the memories of the conch have gone, and now, all hell has broken loose. It really just goes to show how much the island really depended on the conch. ...read more.