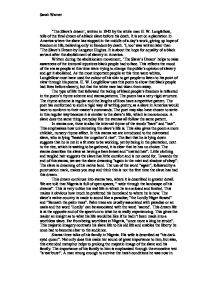 'The Slave's dream', written in 1842 by the white man H. W. Longfellow, tells of the final dream of a black slave before his death. It is set on a plantation in America where the slave has stopped in the middle of a day's work, giving up hope of freedom in life, believing only in freedom by death. 'I, too' was written later than 'The Slave's Dream by Langston Hughes. It is about the hope for equality of a black servant after the abolishment of slavery in America. Written during the abolitionism movement, 'The Slave's Dream' helps to raise awareness of the immoral injustices black people had to face. This reflects the mood of the era as people at this time were trying to change the public's opinion of slavery and get it abolished. As the most important people at this time were whites, Longfellow must have used the colour of his skin to get people to listen to his point of view through his poems. H. W. Longfellow uses this poem to show that black people had lives before slavery, but that the white race had taken them away. The type of life that followed the taking of black people's freedom is reflected in the poem's rhyme scheme and stanza patterns. The poem has a very rigid structure. The rhyme scheme is regular and the lengths of lines have a repetitive pattern. ...read more.

By being untameable, the slave is also like a natural force. "The forests with their myriad tongues" are wild and cannot be tamed this is personification, bringing the forests to life to show that even compared to things which are not living, the slave has no liberty. In the final stanza, the slave reaches his end. "Death had illuminated the land of sleep". This makes it seem as though the slave had wanted to die all along. The word "illuminated" makes you realise he is really experiencing death, no longer dreaming. We also know his life has ended because "he did not feel the drivers whip". This also suggests that he is finally free and whatever they do to him can not affect him any more. The last two lines of the poem suggest that the only way to become free is through death, and that now his soul is free, the slave drivers can never tame him. This is a very optimistic end to the poem in that the slave is not in pain. The chains have been broken. The message given at the end is that you can enslave the body but not the soul. However, the poem is pessimistic in that he is dead, which cannot be a good thing. It is a saddening poem in that the only way he could be happy was in death. ...read more.

The enjambment used makes the lines flow, like his thoughts going through his head. The black person in 'The Slave's Dream' does not believe the white people have consciences, as they are treating the slaves like animals. The final line of this poem is almost a repetition of the first. "I, too, am America." This line is not just saying he has a right to say he is American, it is telling white people that he represents America as much as them and that he is actually part of it by choice, not through orders from them. Personally, I think the poem 'The Slave's Dream' is the better of the two as it is more emotive and gives you more of an insight into life as a slave and what it is like to be treated unfairly. However, I think that 'I, too' is easier to relate to as the poet himself is black. 'The Slave's Dream' is easier to get more involved with because of the length. The techniques used and rigid structure makes it easier to understand. I prefer this poem to 'I, too' because I prefer the more traditional rhyming poem. I accept that not all poems should rhyme, but this common technique enables the poem to become clearer. I dislike the repeated use of enjambment in 'I, too' because it does not allow you to pause and think about what has been written. Both poems are very effective at bringing across discrimination against black people both during and after slavery. Sarah Warner ...read more.

An extremely well-structured essay. Very good use of technical terminology and this is linked to the purpose for its use. The response contains an excellent structure and is extremely well-planned, exhibiting much planning and thought. The writer makes excellent comparisons between both poems throughout and links their features to their purpose and effect upon the audience. It could be improved upon by reference to critical responses to the poems by people at the time they were written. A little further information re Longfellow and why he was so opposed to slavery and how he represented the abolitionist tradition of American intellectuals could also enhance this accomplished response even further.