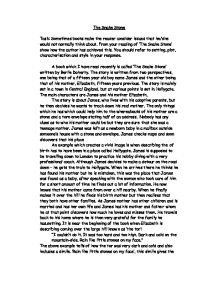 The Snake Stone Task: Sometimes books make the reader consider issues that he/she would not normally think about. From your reading of 'The Snake Stone' show how the author has achieved this. You should refer to setting, plot, characterisation and style in your response. A book which I have read recently is called 'The Snake Stone' written by Berlie Doherty. The story is written from two perspectives, one being that of a fifteen year old boy name James and the other being that of his mother, Elizabeth, fifteen years previous. The story is mainly set in a town in Central England, but at various points is set in Hollygate. The main characters are James and his mother Elizabeth, The story is about James, who lives with his adoptive parents, but he then decides he wants to track down his real mother. The only things which he has which could help him to the whereabouts of his mother are a stone and a torn envelope stating half of an address. ...read more.

He now knows that his mother came from over a hill nearby. When he finally makes it over the hill he finds his birth mother but then realises that they both have other families. As James mother has other children and is married and has her own life and James has his mother and father whom he at that point discovers how much he loves and misses them. He travels back to his home where he is then very grateful for the family he has.setting. It is near the beginning of the book when Elizabeth is describing coming over the large hill known as 'the tor': "I couldn't do it. It was too hard and too high. Dark and cold on the mountain-side. Rain like little stones on my face." The above example tells of how the tor was very dark and cold and also includes a simile. ...read more.

'Sam,' he said. 'Go on!' I said. 'My father's called that. Samuel, they call him. He's not like you though, Father isn't.' I miss Sam, I do. In my dreams I miss him." In the above example it shows how even the language - the way Elizabeth is speaking is different to what is spoken now. This sample shows what Elizabeth really thought of Sam. When reading the book 'The Snake Stone' I found it quite interesting although at times rather boring because it sometimes went into so much description that you had forgotten what was being described to begin with. I think the themes that the author is trying to make you think of is to be grateful for what you've got and the family you already have, that you should not go looking for more when all you need is in front of you. I enjoyed reading this book though as I liked the fact that it was written from two points of view and the way it went back and forth from one character to another, describing different scenes. ...read more.

The second half of this essay is stronger as this is where specific analysis takes place. The first half of the essay spends too much time simply recalling the story which is unnecessary. Focus more on analysing throughout.