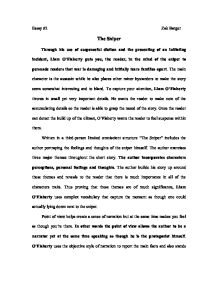 Essay #2 Zak Barger The Sniper Through his use of suspenseful diction and the presenting of an initiating incident, Liam O'Flaherty puts you, the reader, in the mind of the sniper to persuade readers that war is damaging and initially tears families apart. The main character is the assassin while he also places other minor bystanders to make the story seem somewhat interesting and to bland. To capture your attention, Liam O'Flaherty throws in small yet very important details. He wants the reader to make note of the accumulating details so the reader is able to grasp the mood of the story. Once the reader can detect the build up of the climax, O'Flaherty wants the reader to feel suspense within them. ...read more.

O'Flaherty uses the objective style of narration to report the main facts and also stands outside the story. To say that there is a good amount of bias of the author in "The Sniper" would be false. The author tries to approach a happening from all angles and likes to give some perspective into what he is saying. For example when Liam O'Flaherty's reveals that, "everywhere around was quiet, there was not much danger in going through the streets". From this the reader can conclude that there is a sense of risk taking and that the devious sniper is living his life in great danger. The character solely focused on throughout the story happens to be the protagonist. O'Flaherty uses an objective narration structure to portray and focus on all the moves made by the sniper. ...read more.

For example, "The sniper turned over the dead body and looked into his brother's face". This discovery made by the sniper sent a chill down my back as though it was very surreal and hard to believe. Liam O'Flaherty's suspenseful diction kept the reader on the edge of their seat awaiting the outcome until it was truly revealed. In return Liam O'Flaherty's somewhat climax revealed to the reader just what happened and expected an overpowering feeling of disappointment and sadness to overcome the reader. By using excellent vocabulary, perceptions and personal feelings all seen in the sniper, a reader can actually or at least try to experience what the protagonist is feeling first hand. Liam O'Flaherty makes it apparent that the sniper seems to be an emotionless and ruthless man. Actually in reality when the truth is made visible to the sniper, he shows remorse for his brother and there is an overwhelming state of shock that settles over him. ...read more.