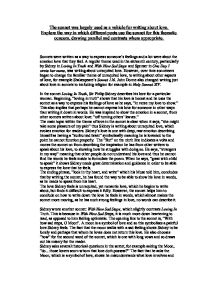 The sonnet was largely used as a vehicle for writing about love.Explore the way in which different poets use the sonnet for this thematic concern.

The sonnet was largely used as a vehicle for writing about love. Explore the way in which different poets use the sonnet for this thematic concern, drawing parallel and contrasts where appropriate. Sonnets were written as a way to express someone's feelings and a lot were about the emotion love that they feel. A regular theme used in the sixteenth century, particularly by Sidney in Loving In Truth and With How Sad Steps and Spenser in One Day I wrote her name, was writing about unrequited love. However, over time sonneteers began to change the familiar theme of unrequited love, to writing about other aspects of love, for example Shakespeare's Sonnet 116. John Donne also changed writing just about love in sonnets to including religion for example in Holy Sonnet XIV. In the sonnet Loving In Truth, Sir Philip Sidney describes his love for a particular woman. Beginning, "loving in truth" shows that his love is honest and he uses the sonnet as a way to express his feelings of love as he says, "in verse my love to show." This also implies that perhaps he cannot express his love for someone in other ways than writing it down in words. He was inspired to show the emotion in a sonnet, from other sonnets written about love: "off turning others' leaves." The main topic within the theme of love in the sonnet is clear when it says, "she might take some pleasure of my pain" thus Sidney is writing about unrequited love, which evokes emotion for readers. ...read more.

Sidney asks several rhetorical questions in the sextet, for example asking the Moon, "do...those lovers scorn whom that love doth possess?" The fact that he asks the Moon, which is a symbol of love, shows he misunderstands what love involves and needs to know from something that does understand. This quotation also explains how his love is unrequited, as he believes women love being idolised but scorn those who love them. The sonnet is different to other sonnets about love in that there is no positive feeling or any description of what he actually feels for another being. Instead, Sidney is showing his lack of understanding about love and his articulation of pain. Unlike Loving In Truth, Sidney does not come to a clear conclusion at the end of the sonnet, but instead finalises it with another rhetorical question showing his complete lack of understanding about love and that writing the sonnet has not helped him to find the answers he needs. In the 17th century, Edmund Spenser wrote One day I wrote her name, which like Loving In Truth is about writing down feelings of love in a sonnet. The type of love Spenser writes about is sad, as he says how he "wrote her name upon the strand, But came the waves and washed it away" showing how his loved one is no longer with him for a reason that is not yet explained. ...read more.

This sonnet is different from Sidney's and Spenser's in that it links love and religion together and his love is extremely strong as he says to God, "you ravish me" where ravish is associate with raping someone. Sidney and Spenser's love on the other hand, is romantic and love for another woman. However there are some similarities with Loving In Truth, as he is writing the sonnet in order to attract attention. This attention in his case is the help he needs from God. Shakespeare wrote a lot of sonnets about love, for example Sonnet 116, which showed how nothing alters the course of true love. He believes love is "an ever-fixed mark" that "is never shaken" and so is showing that love is a too strong emotion that once felt for another person, is a fixed feeling. Unlike Sidney, Spenser and Donne's sonnets, Shakespeare does not write about his feeling of love for another being but instead a general view on what love entails. In conclusion, a lot of earlier sonnets were written about unrequited love and so the writer cannot understand fully about the feeling of love. As a result, many sonneteers wrote their feelings down in order to find an answer to their questions. However, although we can see from Sidney that the answers were not always found, over time, for example with Shakespeare in his sonnet fully understood about love and how it is a feeling that can never be changed. ?? ?? ?? ?? ...read more.