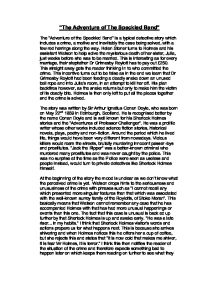 "The Adventure of The Speckled Band" The "Adventure of the Speckled Band" is a typical detective story which includes a crime, a motive and inevitably the case being solved, with a few red herrings along the way. Helen Stoner turns to Holmes and his assistant Watson to help solve the mysterious death of her sister, Julia, just weeks before she was to be married. This is interesting as for every marriage, their stepfather Dr Grimesby Roylott has to pay out �250. This straight away gets the reader thinking in to who committed the crime. This incentive turns out to be false as in the end we learn that Dr Grimesby Roylott had been feeding a deadly snake down an unused bell rope and into Julia's room, in an attempt to kill her off. His plan backfires however, as the snake returns but only to make him the victim of its deadly bite. Holmes is then only left to put all the pieces together and the crime is solved. The story was written by Sir Arthur Ignatius Conan Doyle, who was born on May 22nd 1859 in Edinburgh, Scotland. He is recognised better by the name Conan Doyle and is well known for his Sherlock Holmes stories and the "Adventures of Professor Challenger". He was a prolific writer whose other works included science fiction stories, historical novels, plays, poetry and non-fiction. Around the period which he lived life, things would have been very different from nowadays. Vicious killers would roam the streets, brutally murdering innocent passer-bys and prostitutes. ...read more.

In the end Dr Grimesby Roylott succeeds in killing of his daughter by using his deadly Indian snake so he does not have to part with any of his money, however, his plan backfires and the snake turns on its owner and he is the victim of a deadly bite. In the story Watson describes Holmes as a very well dressed person with good manners and overall follows the role of typical gentlemen. He tells us of Holmes being "a late riser, as a rule". This suggests Holmes gets his own way no matter what and he is very strong willed. Holmes behaves very calmly and cautiously when faced with a client, also when he comes under threats from Dr Grimesby Roylott makes an unexpected entry to Holmes office. He also make sure he takes in every minor detail when dealing with a case to help give him the best chance of solving it and not making any mistakes, "You have come by train this morning, I see...whatever your reasons maybe, you are perfectly correct". I think the author wants us to see Holmes as a very intelligent and inquisitive person who is very good at his job. He is also very reassuring and comforting as shown by when Helen Stoner is in distress about her situation after telling him what has been happening, "Holmes reached forward out of his chair and stroked Miss Stoners forearm". Holmes carries out his investigation carefully by visiting Helen Stoners residence personally and examining every possible cause of the crime. ...read more.

The story ends with the crime being solved which is good as the reader finds out what happens in the end. Also I think the reader would like the reader and they would feel a sense of justice has been served as Dr Grimesby Roylott has been killed for taking someone else's life. I think that he deserve what he gets and I think the reader defiantly will to as it seems unfair for him to not get punished for what he has done otherwise. Conan Doyle ends the story rather unclearly to begin with as Sherlock Holmes states: "It is all over" when at the time it is unclear to what or how is over and it is only in the denouement after the action that what has taken place is finally unravelled. In the end I think Sherlock Holmes was very professional in how he solved the crime and carried out his investigation thoroughly and carefully to solve the crime. I also don't think he is really the default cause of Dr Grimesby Roylott's death as he is probably not worried about the "useless" Police finding him out and he probably feels a sense of justice for himself also. I think this is a typical detective story as there is a committed crime, a few red herrings to puzzle the reader and throw up unexpected conclusions. I think the story was well put together and that it was clear to recognize the "Hero" and the "Villain" in the story by the way the characters acted, e.g. Holmes warm, welcoming and Dr Grimesby Roylott, fierce, viscous and aggressive. ...read more.