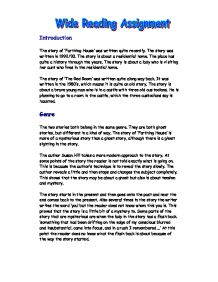 The story of 'Farthing House' was written quite recently. The story was written in 1992/93. The story is about a residential home. The place has quite a history through the years.

Introduction The story of 'Farthing House' was written quite recently. The story was written in 1992/93. The story is about a residential home. The place has quite a history through the years. The story is about a lady who is visiting her aunt who lives in the residential home. The story of 'The Red Room' was written quite along way back. It was written in the 1980's, which means it is quite an old story. The story is about a brave young man who is in a castle with three old custodians. He is planning to go to a room in the castle, which the three custodians say is haunted. Genre The two stories both belong in the same genre. They are both ghost stories, but different in a kind of way. The story of 'Farthing House' is more of a mysterious story than a ghost story, although there is a ghost sighting in the story. The author Susan Hill takes a more modern approach to the story. At some points of the story the reader is not told exactly what is going on. This is because the author's technique is to reveal the story slowly. The author reveals a little and then stops and changes the subject completely. This shows that the story may be about a ghost but also is about tension and mystery. The story starts in the present and then goes onto the past and near the end comes back to the present. Also several times in the story the writer writes the word 'you' but the reader does not know whom this you is. This proves that the story is a little bit of a mystery to. Some parts of the story that are mysterious are when the lady in the story has a flash back. 'something that had been drifting on the edge of my conscious blurred and insubstantial, came into focus, and in a rush I remembered....' ...read more.

The reader can tell because he acts cocky and also wants to try out a scary task. The reader knows he acts cocky and wants to carry out a scary task because in the story it says 'I can assure you, that it will take a very tangible ghost to frighten me.' By this the reader knows he thinks he is a brave person. Also he seems very confident and aware of the task he is saying he will do. The two authors styles are different. This because simply the time they were written in. For example the story of 'Farthing House' was written in the 1990's and the story of 'The Red Room' was written in the 1890's. Therefore the story of ' Farthing House' is a more modern day story and the story of 'The Red Room' is an old fashioned and traditional story. The story of 'Farthing House' is like a letter. The reader can tell this because in the opening paragraph it actually indicates it is a letter. ' and indeed, writing it down sealing it up in an envelope to be read at some future date may still not count as telling. From this quote the reader can tell that it is written in the style of a letter. The story is also very conversational. The reader can tell because the word' and' is used quite a lot. The word 'and' is a word which is used in real life conversations. A good place in the story for an example that the story is very conversational is when she was on her way to Farthing House. ' I had stopped twice, once in a village, once in a small market town and explored churches and little shops, and eaten lunch and had a pot of tea and taken a walk along the banks of a river in the late sunshine and the berries.' ...read more.