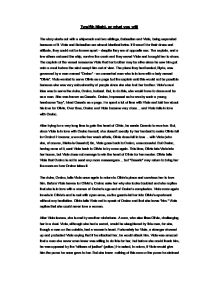 The story starts out with a shipwreck and two siblings, Sebastian and Viola, being separated

Twelfth Night, or what you will The story starts out with a shipwreck and two siblings, Sebastian and Viola, being separated because of it. Viola and Sebastian are almost identical twins. If it wasn't for their dress and attitude, they could not be known apart - despite they are of opposite sex. The captain, and a few others onboard the ship, survive the crash and they saved Viola and brought her to shore. The captain of the vessel reassures Viola that her brother may be alive since he saw him get onto a mast before the wind swept him out of view. The place they had landed, Illyria, was governed by a man named "Orsino" - an unmarried man who is in love with a lady named "Olivia". Viola wanted to serve Olivia as a page but the captain said this would not be possible because she was very untrustworthy of people since she also lost her brother. Viola's next idea was to serve the duke, Orsino, instead. But, to do this, she would have to dress and be as a man. ...read more.

Fortunately for Viola, a stranger showed up and protected Viola saying that if he attacked her, he would attack him. Viola was amazed that a man she never even knew was willing to do this for her, but before she could thank him, he was opposed by the "officers of justice" (police.) He asked, in return, if Viola would give him the purse he once gave to her. But she knew nothing of this man or the purse he claimed to have given to her. But, as the man was carried away, he called Viola by the name of Sebastian. After the whole ordeal was over, Viola thought long and hard about the man, and how, if he was, connected to her brother. It turns out, the man who risked himself for Viola was actually Antonio the sea captain. He had saved Sebastian in the shipwreck and had let him aboard his ship, saving his life. Antonio had given Sebastian his purse, so, if he saw anything he wanted to purchase, he could buy it. And, the reason he protected Viola was in fact, him trying to protect Sebastian. ...read more.

Olivia protested to this and told Orsino that he could not kill her husband! Viola, creating even more confusion, said that she was not married and that Olivia and the priest's statements were both false. Orsino just told her to never be in his sights again. Now, here is where it gets really interesting! Just when you thought the confusion was over...Cesario enters! He instantly proclaims Olivia to be his wife. After everyone had got over the shock of seeing two people with the same name, voice and looks, "Cesario" revealed that she was really a lady called Viola. After all of the errors are sorted out, Olivia decides to stay with Sebastian - and although was a little embarrassed with falling in love with a lady, thought of it as marrying a man. As for Orsino, his heart now brocken from his lost love, Olive, remember all the past times "Cesario" has said he loved him and how he always thought of Cesario as very handsome and poetic, realised that she may have actually meant more than just a page faithfully complimenting their master. He realised that she was actually in love with him, so, right then and there, he proposed to make Viola his wife. Although, he still couldn't help calling her "Cesario" and "boy"! The end. ...read more.