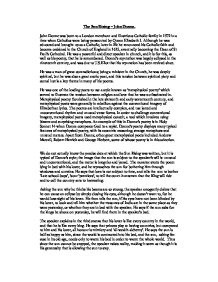 The Sun Rising - John Donne. John Donne was born to a London merchant and illustrious Catholic family in 1572 in a time when Catholics were being persecuted by Queen Elizabeth I. Although he was educated and brought up as a Catholic, later in life he renounced his Catholic faith and became ordained in the Church of England in 1615, eventually becoming the Dean of St Paul's Cathedral. He was a powerful and direct speaker in church, and it is for this, as well as his poetry, that he is remembered. Donne's reputation was largely eclipsed in the nineteenth century, and was due to T.S.Eliot that his reputation has been revived since. He was a man of great contradictions; being a minister in the Church, he was deeply spiritual, but he was also a great erotic poet, and this tension between spiritual piety and carnal lust is a key theme in many of his poems. He was one of the leading poets to use a style known as 'metaphysical poetry' which served to illustrate the tension between religion and love that he was so fascinated in. ...read more.

The rhyme scheme in each stanza is ABBACDCDEE. This lyric poem like many other metaphysical poems is a brief but intense meditation, characterised by striking use of irony and wordplay. Beneath the formal structure of rhyme, metre and stanza is the underlying less formal structure of the poet's argument. The use of language in the stanzas is lively and varied. The almost breathless colloquial lines are however qualified in each stanza by a wholly regular and fluent rhyming couplet which enables Donne to conclude with a rhetorical flourish. Donne's lovers seem to transcend the limits of the physical world by disregarding external influences, coercing all things around them instead. Thomas Docherty a critic of John Donne states that in Donne's poems ' the lovers become the world and occupy the same position of centrality as the sun becoming, in short, the still point around which all else is supposed to revolve'. In his poems the displacement of the outside world in favour of the two lover's inner world serves to support the key theme of the centrality of human love amidst a permanent physical universe. ...read more.

However in lines 27-28 the narrator reasons that since the sun is obligated to illuminate the world it must shine on him and his lover. The speaker captures the essence of his feeling in the final stanza when after taking pity on the sun and deciding to ease the burdens of his old age, he declares 'Shine here to us, and thou art everywhere'. In the final line the narrator concludes that his bed is the centre of the universe and his walls are its borders, emphasising his belief that his love exists in an independent world from the one outside his bedroom. The Sun Rising is a typical metaphysical poem about how love is transcending the outside world, with the speaker assuming that his subjective states of feeling are the objective truth. Donne portrays the speaker as a lover who is so immersed in the bliss of love that he reinvents reality in his mind, with his love existing separate to the outside world. The irregular form and meter of the poem exhibits the typical features of the metaphysical poem, and this reinforces how unconventional and unusual the poem is. ...read more.