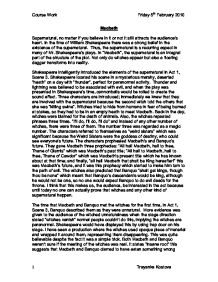 Macbeth Supernatural, no matter if you believe in it or not it still attracts the audience's heart. In the time of William Shakespeare there was a strong belief in the existence of the supernatural. Thus, the supernatural is s recurring aspect in many of Mr. Shakespeare's plays. In "Macbeth", the supernatural is an integral part of the structure of the plot. Not only do witches appear but also a floating dagger transforms into reality. Shakespeare intelligently introduced the elements of the supernatural in Act 1, Scene 3. Shakespeare located his scene in a mysterious marshy, deserted "heath" on a day with "thunder", perfect for paranormal activity. Thunder and lightning was believed to be associated with evil, and when the play was presented in Shakespeare's time, cannonballs would be rolled to create the sound effect. Three characters are introduced; immediately we knew that they are involved with the supernatural because the second witch told the others that she was "killing swine". Witches tried to hide from humans in fear of being burned at stakes, so they had to be in an empty heath to meet Macbeth. Back in the day, witches were blamed for the death of animals. ...read more.

"If chance will have me King, why chance may crown me without my stir" but will Macbeth wait for his royal position or will the supernatural force his drive? We couldn't wait to find out. Macbeth took things into his own hands as he had no more patience to wait for "chance" to crown him. In Act 2, Scene 1, the supernatural, forced him to make tragic action. The supernatural setting, when dark creatures were believed to their highest power, at midnight "she goes down at twelve" fleance had to say this, to make it clear to the audience what time it was because the only lightning Shakespeare used was natural. (Shakespeare normally performed his play in the evening). Entities such as demons and devils haunted humans whilst they slept. Nightmares and dreams played an important part in this scene. Banquo had "dreamt last night of the three Weird Sisters" and asked the angels to stop his nightmares, "Merciful powers, / Restrain in me the curse thoughts that nature/ Gives way to in repose." It was as if witched and demons were invading Banquo's mind while he slept, and Banquo also mentioned a "diamond", which was regarded as a charm against nightmares. ...read more.

Shakespeare presented the supernatural by using witches who could tell the future and the floating dagger. Even nowadays there are still elements of the supernatural and superstition surrounding this play as it is assumed that Shakespeare used the spells of real witches which made them angry and caused them to curse his play. There have been many accidents and deaths of actors who mention the "Macbeth." I think the supernatural occurrences had a big part in this play. Without them the play wouldn't be what it is because people would less believe what was happening. Shakespeare did a good job by spotting what was interesting for his audience in the Elizabethan era and they would have appreciated it because it was something that was interesting for them. I personally think that the play has the same effect on today's audience because even today we still don't know if supernatural exist and if it is something true... No matter if it does or not it will be a mystery for many more years. Using supernatural creatures has absolutely formed a remarkable atmosphere in Shakespeare's final tragedy, "Macbeth". ?? ?? ?? ?? Course Work Friday 5th February 2010 1 Trayanka Kostova ...read more.

The candidate starts with a good introduction, supernatural is discussed as a theme and how Shakespeare uses this to entice his audience. The essay flows well, there are some great references where the candidate has clearly done independent research. I ...

The candidate starts with a good introduction, supernatural is discussed as a theme and how Shakespeare uses this to entice his audience. The essay flows well, there are some great references where the candidate has clearly done independent research. I love how the candidate describes the play as a performance and how certain tricks would be used such as rolling cannonballs to stimulate thunder. This a refreshing take on how to write this kind of essay and works well. A superb response the the question/statement given.

The candidate has selected appropriate quotations to back up their opinions and show a good level of analysis. The candidate even draws on their own experience by commenting on a version of Macbeth that they have seen at the theatre. The candidate also makes appropriate references to how Shakespeare set his scenes. Unfortunately there is no reference to linguistic techniques such as the use of metaphors, alliteration, repetition etc and how this add depth to the play. This is an important aspect when analysing work at this level. This essay is very well written in a clear an fluent style with a good range of vocabulary, I feel that it is of a high standard for GSCE level.