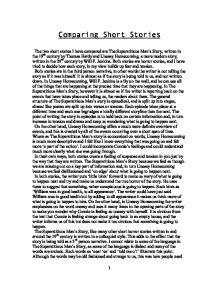 Comparing Short Stories The two short stories I have compared are The Superstitious Man's Story, written in the 19th century by Thomas Hardy and Uneasy Homecoming, a more modern story, written in the 20th century by Will F. Jenkins. Both stories are horror stories, and I have tried to decide how each story, in my view builds up fear and tension. Both stories are in the third person narrative, in other words the writer is not telling the story as if it was himself. It is almost as if the story is being told to us, and not written down. In Uneasy Homecoming, Will F. Jenkins is a fly on the wall, and he can see all of the things that are happening at the precise time that they are happening. In The Superstitious Man's Story, however it is almost as if the writer is reporting back on the events that have taken place and telling us, the readers about them. The general structure of The Superstitious Man's story is episodical, and is split up into stages, almost like poems are split up into verses or stanzas. Each episode takes place at a different time and each one begrudges a totally different storyline than the next. The point of writing the story in episodes is to hold back on certain information and, in turn increase in tension and drama and keep us wondering what is going to happen next. ...read more.

However, what is not so predictable is the anti climax that the writer adds on to the story for effect. He states that William Privett is seen again, after he is dead at the spring where his son died. This was rather strange in the context of the story because I did not know anything about his son dying and also did not expect William Privett to be seen back alive again after he had died. On the other hand, the ending of Uneasy Homecoming is dramatic, if not predictable in the circumstances. Connie is being bombarded and trapped in her own home by a thief who is taking all of her possessions. Connie is worried and believes that she is at risk if she cannot escape fast. The actions she takes are a spur of the moment, and without thinking she sets the house, that she once loved alight with the thief inside. I didn't feel that the ending was as enticing in Uneasy Homecoming, I say this because it was hinted throughout the story that something drastic was going to happen to Connie. Every little thing or movement is carefully chosen to add impact on the overall feeling I got when reading the story. Even little sounds like a bat flying overhead and the refrigerator turning on are described to create an extra feeling of uneasiness and dread towards Connie's wellbeing. The settings of both stories are totally different; but in their own ways are not dissimilar. ...read more.

His way of unfolding the story is for interest in the reader and to me, it was to make me understand more clearly the concepts of the story. The storyteller of Uneasy Homecoming, Will F. Jenkins uses distinct language in order to build up the tension and at the same time sheer excitement of what is going to happen next. He uses shortened sentences so I read more quickly and they also reflect the tension and excitement that he is trying to build up. He uses dramatic irony to describe where the thief is in the house in comparison to Connie and we almost want to rush in and save her. He uses repetition of the word uneasy and uses it several times in the opening few paragraphs. This is to elaborate on the circumstances ahead of Connie and also to maintain that she is feeling uneasy about going back to an empty home. Overall, the main difference between the two short stories I have analysed is the time that they were written; The Superstitious Man's Story written in 1891 and Uneasy Homecoming written in the 20th century. Both of them, however, have some key factors that most horror stories have; they are both set at night and both describe things with great detail to build up the fear and tension inside us. Differences apart, I felt that they were both true horror stories and with language, character, setting, structure and atmosphere, I felt that both writers perfected building up fear and tension inside of us. By Ryan Briggs 4K ?? ?? ?? ?? 1 . ...read more.