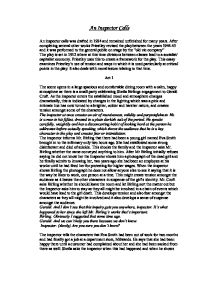 The techniques used by Priestley in An Inspector Calls

An Inspector Calls An inspector calls was drafted in 1934 and remained unfinished for many years. After completing several other works Priestley revised the play between the years 1944-45 and it was performed to the general public on stage by the "old vic company" The play is set in 1912 where at this time divisions between classes lead to a socialist/ capitalist economy. Priestley uses this to create a framework for the play. This essay examines Priestley's use of tension and ways in which it is used particularly at critical points in the play. It also deals with moral issues relating to that time. Act 1 The scene opens in a large spacious and comfortable dining room with a calm, happy atmosphere as there is a small party celebrating Sheila Birlings engagement to Gerald Croft. As the inspector enters the established mood and atmosphere changes dramatically, this is indicated by changes in the lighting which was a pink and intimate hue has now turned to a brighter, colder and harsher nature, and creates tension amongst some of the characters. The inspector at once creates an air of massiveness, solidity and purposefulness. He is a man in his fifties, dressed in a plain darkish suit of the period. He speaks carefully, weightily and has a disconcerting habit of looking hard at the person he addresses before actually speaking which shows the audience that he is a key character in the play and creates fear or intimidation. ...read more.

The atmosphere is extremely tense amongst the characters. When Mrs. Birling enters the scene she enters briskly and self-confidently, quite out of key with the scene that has just passed. Sheila feels this at once. Sheila tries to warn her but Mrs. Birling dismisses her, revealing her selfish and stubborn attitude to life and the way in which her actions might have an impact on the events in the story. It could also indicate what sort of relationship Mr. and Mrs. Birling has with their children. The next chain of events unfold when Gerald reveals that Daisy Renton after being kicked out of Milwards had in a desperate attempt to earn some money had worked as a prostitute. This was when Gerald met her. Gerald had looked after her for a while, had given her some money and then broke the affair off. Gerald then leaves the room to "walk about for awhile". After Gerald leaves the inspector shows Mrs. Birling the photograph and asks her whether she recognizes it. She refuses until the Inspector accuses her of seeing Eva Smith only two weeks ago. After the inspector constantly pressurizes her Mrs. Birling finally admits that she had come to the Brumley Women's Charity Organization in which Mrs. Birling was a prominent member to ask for help. ...read more.

Who was the inspector? Priestley leaves the audience to answer that question, therefore the mystery and the tension of what awaits the family looms beyond the fall of the stage curtains. Conclusion Priestley uses ironic tension at the beginning of the play e.g. WW2, Titanic by using Birling's capitalist viewpoint to life. At the end of each act he creates tension and suspense as to hook the audience in to the play and to promote the final message. In the inspectors final speech he tells the Birlings that there are millions and millions of Eva Smiths all over the world and that we are all members of one body and we must look after each other. Tension also develops when the inspector shows the characters the photographs and when Gerald suspects that he might have been showing them different photo's in order to trick them. The audience has a chance to anticipate the plot and there are points in the play which hints to what might happen. The order in which the inspector reveals the characters involvement and the way in which he give an impression that "he already knows" also creates tension. He starts right at the beginning when Birling sacks Eva from the from the factory and works his way down to the latest development. The entrances and exits of the characters also create suspense and tension as times of entrances etc. become a crucial part of the play. ...read more.