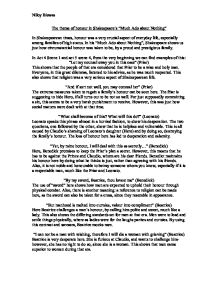 The theme of honour in Shakespeare's "Much Ado about Nothing" In Shakespearean times, honour was a very crucial aspect of everyday life, especially among families of high status. In his "Much Ado about Nothing", Shakespeare shows us just how circumstantial honour was taken to be, by a proud and prestigious family. In Act 4 Scene 1 and act 5 scene 4, from the very beginning we can find examples of this: "Let my counsel sway you in this case" (Friar) This shows that the people of that era considered that Friar to be a wise and holy man. Everyone, in this great dilemma, listened to his advice, as he was much respected. ...read more.

and by doing so, destroying the family's honour. The loss of honour here has led to desperation and calamity. "Yet, by mine honour, I will deal with this as secretly..." (Benedick) Here, Benedick promises to keep the Friar's plan a secret. However, this means that he has to be against the Prince and Claudio, whom are his dear friends. Benedict maintains his honour here by doing what he thinks is just, rather than agreeing with his friends. Also, it is not noble and honourable to betray someone whom you know, especially if it is a respectable man, much like the Friar and Leonato. "By my sword, Beatrice, thou lovest me" (Benedick) ...read more.

This shows that men came superior to women during that era. "But Margaret was in some fault in this..." (Leonato) Leonato speaks of Margaret committing the sin hero was accused for. However, he does not shame her very much, can there is no chock from the other characters upon the realisation of this news. This can easily be explained: as Margaret was a servant, much inferior to Hero, she was therefore expected of such standards, showing that along with gender, honour also varies with one's status. Overall, Shakespeare's "Much Ado about Nothing" portrays how honour and respect varied during that era, depending on one's gender and their status within the society. TO the likes of today, a great change can be seen: in most places, we are indeed treated in equity. ?? ?? ?? ?? Niloy Biswas ...read more.