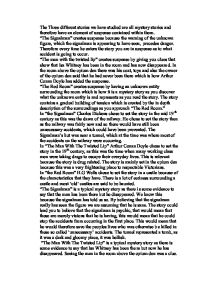 The Three different stories we have studied are all mystery stories and therefore have an element of suspense contained within them.

The Three different stories we have studied are all mystery stories and therefore have an element of suspense contained within them. "The Signalman" creates suspense because the warning of the unknown figure, which the signalman is appearing to have seen, precedes danger. Therefore every time he enters the story you are in suspense as to what accident is going to occur. "The man with the twisted lip" creates suspense by giving you clues that show that Isa Whitney has been in the room and has now disappeared. In the room above the opium den there was his coat, toys and also the owner of the opium den said that he had never been there which is how Arthur Conan Doyle has added the suspense. "The Red Room" creates suspense by having an unknown entity surrounding the room which is how it is a mystery story as you discover what the unknown entity is and represents as you read the story. ...read more.

The story could lead you to believe that the signalman is psychic, that would mean that these are merely visions that he is having, this would mean that he could stop the accidents from occurring in the first place. This would mean that he would therefore save the peoples lives who was otherwise be killed in these so called 'unnecessary' accidents. The tunnel represented a tomb, as it was a dark and gloomy place, it was hellish. "The Man With The Twisted Lip" is a typical mystery story as there is some evidence to say that Isa Whitney has been there but now he has disappeared. Seeing the man in the room above the opium den was a clue. At first you did not know who he was or what he represented. The opium den represented a tomb, as it was dark, gloomy and full of half-dead bodies, it was hellish, this is because it was full of smoke and there was a flashing red light. ...read more.

"The long, draughty subterranean passage was chilly and dusty," long to make the room seem as though it is more isolated. Subterranean meaning underground so not of this world. Chilly and dusty makes it more uncomfortable. All three stories have somewhere that is dark and gloomy such as the opium den. They also have shadows such as the ones in the Red Room. All three stories use the senses, The Signalman uses sound, The Red Room uses sight and The Man With The Twisted Lip uses smell such as in the opium den, All three stories have a relationship with hell, the red room, the opium den and the tunnel as I have explained in the preceding paragraphs. All of the stories have man-made hellholes. I think that the story of The Red Room was the most effective as it was the most descriptive and it uses all of your senses more than the other two stories do. Also most people that will read the book would have been to a castle and would have probably heard a few stories about haunted castles. ...read more.