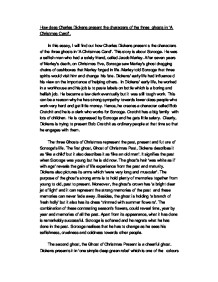 The three Ghost of Christmas represent the past, present and future of Scrooge's life

How does Charles Dickens present the characters of the three ghosts in 'A Christmas Carol'. In this essay, I will find out how Charles Dickens presents the characters of the three ghosts in 'A Christmas Carol'. This story is about Scrooge. He was a selfish man who had a solely friend, called Jacob Marley. After seven years of Marley's death, on Christmas Eve, Scrooge saw Marley's ghost dragging chains of cashboxes that Marley forged in life. Marley told Scrooge that three spirits would visit him and change his fate. Dickens' early life had influenced his view on the importance of helping others. In Dickens' early life, he worked in a workhouse and his job is to paste labels on bottle which is a boring and hellish job. He became a law clerk eventually but it was still tough work. This can be a reason why he has strong sympathy towards lower class people who work very hard and get little money. ...read more.

Besides, the ghost is holding 'a branch of fresh holly' but it also has its dress 'trimmed with summer flowers'. The combination of these contrasting season's flowers, could reveal time, year by year and memories of all the past. Apart from its appearance, what it has done is remarkably successful. Scrooge is softened and he regrets what he has done in the past. Scrooge realises that he has to change as he sees his selfishness, cruelness and coldness towards other people. The second ghost, the Ghost of Christmas Present is a cheerful ghost. Dickens presents it in 'one simple deep green robe' which is one of the colours for Christmas. It has lots of fresh Christmas food besides it, such as sausages, oysters, pies, puddings'. It seems like the ghost is celebrating Christmas merrily. Its eyes were 'clear and kind', its 'cheery voice' and its 'unconstrained demeanour' exposes that it is a cheerful and jolly ghost. The horn that is carrying is called the horn of plenty, meaning a lot of goodness. ...read more.

The ghost signifies fears towards death. The ghost function is to tell Scrooge how the situation be after he is dead and how will his neighbours react. Scrooge's neighbours take things from him and even the curtains from his bed and shirt off his back. Dickens presents this ghost as a scary character unlike the first two ghosts because the purpose of Christmas Yet to Come is to scare Scrooge. It is vital for Scrooge to know what others think of him so he could change. The ghost is scary because it has the responsibility to make sure Scrooge would change as this is the last chance. Dickens' purpose of writing the story is to remind people to help others and don't be selfish. The purpose of the story is to entertain and to teach. It also tells us that nothing can buy happiness from being with families and friends. Dickens has been successfully achieved his aims as the set out of the story is interesting and meaningful by presenting three ghost to 'frighten' his readers. ...read more.