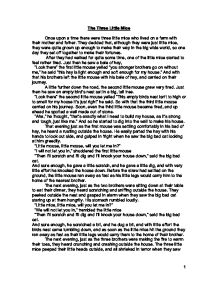 The Three Little Mice Once upon a time there were three little mice who lived on a farm with their mother and father. They decided that, although they were just little mice, they were quite grown up enough to make their way in the big wide world, so one day they set off together to make their fortunes. After they had walked for quite some time, one of the little mice started to feel rather tired. Just then he saw a bale of hay, "Look there" the first little mouse yelled "you stronger brothers go on without me," he said "this hay is light enough and soft enough for my house." And with that his brothers left the little mouse with his bale of hay, and carried on their journey. ...read more.

"Little mouse, little mouse, will you let me in?" "I will not let you in," shuddered the first little mouse "Then I'll scratch and I'll dig and I'll knock your house down," said the big bad cat. And sure enough, he gave a little scratch, and he gave a little dig, and with very little effort he knocked the house down. Before the straw had settled on the ground, the little mouse ran away as fast as his little legs would carry him to the home of the nearest brother. The next evening, just as the two brothers were sitting down at their table to eat their dinner, they heard scratching and sniffing outside the house. They peeked outside the nest and gasped in alarm when they saw the big bad cat staring up at them hungrily. ...read more.