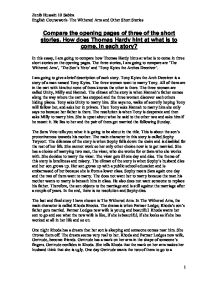 The three stories, I am going to compare are 'The Withered Arm', 'The Son's Veto' and 'Tony Kytes the Arches Deceiver'.

Compare the opening pages of three of the short stories. How does Thomas Hardy hint at what is to come, in each story? In this essay, I am going to compare how Thomas Hardy hints at what is to come in three short stories on the opening pages. The three stories, I am going to compare are 'The Withered Arm', 'The Son's Veto' and 'Tony Kytes the Arches Deceiver'. I am going to give a brief description of each story. Tony Kytes the Arch Deceiver is a story of a man named Tony Kytes. The three women want to marry Tony. All of them are in the cart with him but none of them knows the other is there. The three women are called Unity, Milly and Hannah. The climax of the story is when Hannah's father comes along the way where the cart has stopped and the three women discover each others hiding places. Tony asks Unity to marry him. She says no, walks of secretly hoping Tony will follow her, and asks her in private. Then Tony asks Hannah to marry him she only says no because her father is there. The resolution is when Tony is desperate and then asks Milly to marry him. She is upset about what he said to the other two and asks him if he meant it. ...read more.

She then discovers Farmer Lodge and Rhoda are there together. Rhoda throws Gertrude to the floor. The dead person is hers and Farmer Lodges son. A few weeks later Gertrude dies of the paralysed arm. Rhoda carries on working until she gets to old and frail. Farmer Lodges misses his son so he converts his house into an orphanage for boys. He moves away and retreats to +the countryside. Some short stories have features that are typical of short stories. One of the most important features is that the story has to have a few characters. The story would be too confusing if there were too many characters in the story. Another feature of a short story is that they have twists at the end. The main theme to these short stories is misery. Misery is a typical feature of a Hardy short story. Tony Kytes the Arch Deceiver is the only story in this that is less miserable than the others are. Hardys stories usually show that fate is inevitable; it is bound to happen no matter what. Nineteenth century short stories are more descriptive and longer than modern short stories. The reason for this is that in the nineteenth century people had less opportunity for travel and entertainment. They had time to read detailed descriptions. ...read more.

We know it will be about someone having a withered arm. Next by finally talking about the son going to meet his father's new wife the next day. In this essay we have looked at the three short stories; The Withered Arm, Tony Kytes the Arch Deceiver and The Son's Veto and shown how the opening in someway hints at what is to come). For example in the Tony Kytes the Arch Deceiver, we can tell what is to come firstly from the title. The title tells us about someone called Tony Kytes and him being a great confidence trickster who cannot continue doing this. In The Sons Veto the son's snobbery is clear at the beginning. He thinks of his mother as lower than himself. His snobbery is actively demonstrated towards the end when his mother wants to marry. He says no and looks down on both his mother and her boyfriend. In The Withered Arm, the readers attention is quickly drawn towards the fact that in the new marriage the wife is 20 years her husbands junior. The husband marries a young beautiful wife. This shows he is shallow and interested only in appearance. The marriage is already based upon unstable foundations. When the wife's beauty is tarnished, he rejects her with tragic consequences. ?? ?? ?? ?? Zenib Hussain 10 Sabira English Coursework- The Withered Arm and Other Short Stories 1 ...read more.