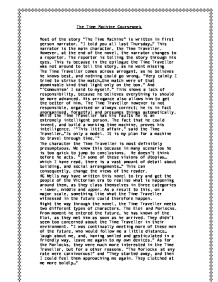 The Time Machine Coursework Most of the story "The Time Machine" is written in first person narrator. "I told you all last Thursday..." This narrator is the main character, the Time Traveller. However, at the end of the novel, the narrator changes to a reporter. The reporter is telling the story through his eyes. This is because in the epilogue the Time Traveller was not around to tell the story, as he went missing The Time Traveller comes across arrogant, as he believes he knows best, and nothing could go wrong. "Very calmly I tried to strike the match...the match were of that abominable kind that light only on the box." And "'Communism' I said to myself." This shows a lack of responsibility, because he believes everything is should be more advanced. His arrogance also allows him to get the better of him. ...read more.

As a result to this, on a major scale, something like what the Time Traveller witnessed in the future could therefore happen. Right the way through the novel, the Time Traveller meets two different types of characters. The Eloi and Morlocks. From moment he entered the future, he has known of the Eloi, as they met him as soon as he arrived. They didn't seem too concerned about the Time Traveller in their environment. "I was continually meeting more of these men of the future, who would follow me a little distance... laugh about me, and, having smiled and gesticulated in a friendly way, leave me again to my own devices." As for the Morlocks, they were much more interested in the Time Traveller, but for a other reasons. "The Morlocks at any rate were carnivorous!" and "They started away, and then I could feel them approaching me again. ...read more.

HG Wells' book therefore has a similar speculation like Darwin's theory of evolution, and that in fact the Genesis was wrong. However, to compare the understanding and knowledge from the time when HG Wells wrote this novel and the development and discoveries of today's world as well as a far more relaxed viewpoint to religion, the Time Machine by today's standards would not be a literary argument. Today, readers would not dislike the character, but they may question his ways of preparation, but today we have further technology, so the views may be divided. I believe that the character the Time Traveller would have been disliked in the Victorian era. This is because of the controversy about religion. People would have though what the character was doing was unruly as he was essentially going against God and possibly varying the way of the future. Some people didn't want to know what was going to happen, they may have felt threatened, but on the other hand, the Victorians found the unknown very interesting. ...read more.