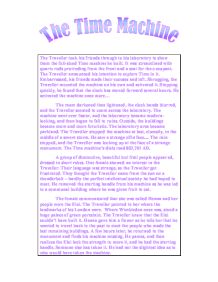 The Traveller took his friends through to his laboratory to show them the full-sized Time machine he built. It was streamlined with quartz rods protruding from the front and a seat for the occupant. The Traveller announced his intention to explore Time in it. Embarrassed, his friends made their excuses and left. Shrugging, the Traveller mounted the machine on his own and activated it. Stopping quickly, he found that the clock has moved forward several hours. He activated the machine once more... The room darkened then lightened, the clock hands blurred, and the Traveller seemed to zoom across the laboratory. The machine went ever faster, and the laboratory became modern-looking, and then began to fall to ruins. Outside, the buildings became more and more futuristic. The laboratory area became parkland. ...read more.

Where Wimbledon once was, stood a huge palace of green porcelain. The Traveller knew that the Eloi couldn't have built it. Henna gave him a flower as he tells her that he wanted to travel back to the past to meet the people who made the last remaining buildings. A few hours later, he returned to the monument and finds his machine missing. He panics, and then realizes the Eloi lack the strength to move it, and he had the starting handle. Someone else has taken it. He had not the slightest idea as to who would have taken the machine. The next morning while the Traveller was with Henna, he heard the sound of machinery coming from a large well. Henna was scared of the well but the Traveller decided to go down into it. ...read more.

He traveled out far into the future, where there was only rocks covered in green lichen. He then traveled to a beach where he was menaced by giant crabs.... Terrified, the Traveller put his machine into reverse. And at long last, the laboratory walls reformed around him. The Traveller related his tale to his friends, back in his living room. He was still dirty and so tired from his adventure. His friends didn't believe him and they found his tale rather amusing and told him that it was all just a dream. The Traveller then laughed and everything seemed to fade away from his mind. He murmured, "But they say life is a dream," as he filled his pipe. He put his hand into his pocket for a match and brought out the flower he was given. He softly said, "Henna".... ...read more.