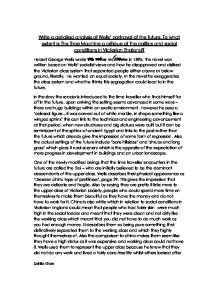 Write a detailed analysis of Wells' portrayal of the future. To what extent is The Time Machine a critique of the politics and social conditions in Victorian England? Hebert George Wells wrote The Time Machine in 1895. The novel was written based on Wells' socialist views and how he disapproved and disliked the Victorian class system that separated people either above or below ground, literally. He wanted an equal society. In the novel he exaggerates the class system and what he thinks this segregation could lead to in the future. In the story the reader is introduced to the time traveller who finds himself far off in the future. Upon arriving the setting seems advanced in some ways - there are huge buildings within an exotic environment. However he sees a 'colossal figure...it was carved out of white marble, in shape something like a winged sphinx' this can link to the technical and engineering advancement at that period, when new structures and big statues were built but it can be reminiscent of the sphinx of ancient Egypt and links to the past rather than the future which already give the impression of some form of regression. ...read more.

and he has to go down to see them and this could link to how the middle class always look down on the working class. It could also relate to how the working class lived in dark and grubby places and in the future they will move from living on the ground to moving below. This shows that their status in society has not progressed and has deteriorated so as a result it's been going even below ground level. The Morlocks are living with the machines in the future where as they used to try to make a living from working with them. When he is first introduced to them it compels the narrator to reconsider his initial hypothesis, and to bring out the socially allegorical significance of the division of society into 'Haves' and 'Have-nots'. Also in the future they own the machinery in contrast to just working with them. They are describes as being 'ape-like' and 'stooping white creatures' which shows that they have physically devolved in the future however in Victorian society the middle class considered to be mentally behind and much like apes as humans are more intelligent but the posh people judged the working class as being intellectually behind and less human than they were. ...read more.

Word Count: 1927 Although at a glance The Time Machine may seem to be a fictional glance at the future, but once investigated it is understood that Wells incorporates a wealth of knowledge into his work. Wells uses satire and parody ingeniously to sculp an image of the social division of England at the time. He also craftily represents present day England using the future resulting from the theory of Social Darwinism. The Time Machine is not only a look into the future, but also a look back into the past and the way things were in England around the 1900's. A parody is a feeble or ridiculous imitation. The Time Machine is in itself a large drawn out parody. Wells' storyline of The Time Machine is based entirely of his view of England in the 1900's. Wells' view is very skewed because he was not of the upper class and therefore had a pessimistic view of England. Wells describes the Eloi as such: "...for I never met people more indolent or more easily fatigued." pp. 37Why else would he represent the upper class by the lazy "Eloi,"and the lower or working class represented by the "Morloc ?? ?? ?? ?? Sahlia Khan ...read more.