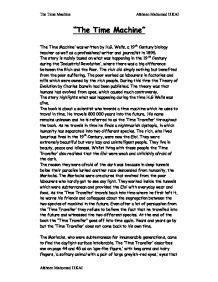 "The Time Machine" 'The Time Machine' was written by H.G. Wells, a 19th Century biology teacher as well as a professional writer and journalist in 1895. The story is mainly based on what was happening in the 19th Century during the 'Industrial Revolution', where there was a big difference between the Rich and the Poor. The rich did simply nothing but benefited from the poor suffering. The poor worked as labourers in factories and mills which were owned by the rich people. During this time the Theory of Evolution by Charles Darwin had been published. The theory was that humans had evolved from apes, which caused much controversy. The story highlights what was happening during the time H.G Wells was alive. The book is about a scientist who invents a time machine which he uses to travel in time. He travels 800 000 years into the future. His name remains unknown and he is referred to as the 'Time Traveller' throughout the book. As he travels in time he finds a nightmarish dystopia, in which humanity has separated into two different species. The rich, who lived luxurious lives in the 19th Century, were now the Eloi. They were extremely beautiful but very lazy and unintelligent people. They live in beauty, peace and idleness. Whilst living with these people the 'Time Traveller' also realised that the Eloi were weak and childishly afraid of the dark. The reason they were afraid of the dark was because in deep tunnels below their paradise lurked another race descended from humanity, the Morlocks. The Morlocks were creatures that evolved from the poor labourers who hardly got to see any light. They worked inside the tunnels which were subterranean and provided the Eloi with everyday wear and food. As the 'Time Traveller' travels back into time where he first left it, he warns his friends and colleagues about the segregation between the two species of mankind in the future. ...read more.

The Morlocks also looked like apes and Darwin's theory was that humans have evolved from apes. This links to the ideas of Sigmund Freud, who believed that the way we act and our actions are controlled to what we think mentally. This is shown by the behaviour of the Eloi and Morlocks. The Eloi appear to be very lazy and are distracted very easily. They have no worries about anything and seem to have a terrible memory. The Morlocks are the poor who lived around machines, who had no other choice but to be very clever and aware of everything due to their living conditions. The ideas of Karl Marx and capitalism are also used in the book as he believed that the poor would rise up and take over. The Morlocks who are the evolved versions of the poor seize control over the Eloi, whilst the Eloi were terribly frightened of them. I agree with H.G Wells in some ways as I believe in Darwin's theory of mankind, which humans change over millions of years according to their environment and living conditions, which is why I think evolution could take place. I have no certain belief in the theory of capitalism. I would like to know what the future holds for me. In some ways I don't think it's beneficial as it's always good to just go with the flow and let it remain unknown as that way you will have a hope in life for something new to come along any day so it's better if it's left alone. In some ways it's good to know what's going to happen in the future because if its wrong or not the way you want it to be then you can change it and make it better. In this book I agree with many of H.G Wells's ideas, but I disagree with some as well. Overall I think the book was great and I believe that H.G Wells had a great impact in the 19th Century during the Industrial Revolution. ?? ?? ?? ?? The Time Machine Afsheen Mahomed 11KAI Afsheen Mahomed 11KAI ...read more.