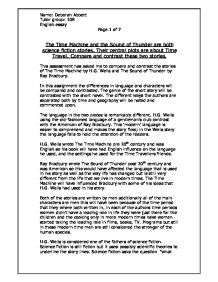 The Time Machine and the Sound of Thunder are both science fiction stories. Their central plots are about Time Travel. Compare and contrast these two stories.

The Time Machine and the Sound of Thunder are both science fiction stories. Their central plots are about Time Travel. Compare and contrast these two stories. This assessment has asked me to compare and contrast the stories of The Time Machine by H.G. Wells and The Sound of Thunder by Ray Bradbury. In this assignment the differences in language and characters will be compared and contrasted. The genre of the short story will be contrasted with the short novel. The different ways the authors are separated both by time and geography will be noted and commented upon. The language in the two pieces is remarkably different, H.G. Wells using the old-fashioned language of a gentleman's club contrast with the American of Ray Bradbury. This 'modern' language is easier to comprehend and makes the story flow; in the Wells story the language fails to hold the attention of the readers. H.G. Wells wrote The Time Machine pre 20th century and was English so his book will have had English influence on the language he used, and the settings he used for the Time Travellers friends. Ray Bradbury wrote The Sound of Thunder post 20th century and was American so this would have affected the language that is used in his story as well as the way life has changed but is still very different from the life that we live in modern times. The Time Machine will have influenced Bradbury with some of his ideas that H.G. Wells had used in his story. Both of the stories are written by men additionally all of the main characters are men this will have been because of the time period that they where both written in, in each of the authors time periods women didn't have a leading role in life they were just there for the children and the cooking only in more modern times have women started taking the leading role in films, books, TV. ...read more.

And I am not a young man" This is on the discovery that the Time Machine has gone missing; he is running towards the white sphinx because this is where it has been taken. On the very first page of the story Wells gives you a small amount of description about the Time Traveller "...marking the points with a lean forefinger- as we sat and....admired his earnestness (truthful, honest)" character. From this small description you find out that the Time Traveller has thin finger and this might be because he is thin so from this you can read into it and find out that the Time Traveller is "lean" as Wells describes. Further into the story Wells gives the reader a description of what the Time Traveller is wearing the first time the rest of the characters see him after he has been doing his time travel. "He was in an amazing plight. Hi coat was dusty and dirty . . . . His chin has a brown cut on it-a cut half healed . . . . He walked with just such a limp as I had seen in footsore tramps. We stared at him in silence, expecting him to speak." (Page 15) You get given the impression that the Time Traveller has been through a lot and has been traumatized by his experience. He is in total shambles and hasn't had a wash in days, his guests are shocked by this and they are all wondering what has happened to their friend. On pages 25-26 Wells writes that The Time Traveller is both afraid and in a panic, however, this passage shows that he is able to control it this shows the reader that Wells has give the Time Traveller good self control over his feelings towards a situation and he just carries on so that he can get the job done. ...read more.

The main reason for this is because he is writing a short story and does not need to go into such detail with his settings and characters, if he did then his short story would become a lot longer. Bradbury even though he uses "simple" language he Still manages to get what he is trying to show the reader across. Because of the time that Bradbury wrote the Sound of Thunder the language seems to be more "modern" but still is quite out of date for the times that live in now but because we are comparing it to a much older text that uses language that isn't used in normal day context. Wells does not use the detail of his characters that much so that they have more mystery; he uses settings and atmosphere to help make mental imagery in the readers head. On page 78 the passage beginning "looking at these stars suddenly dwarfed my own troubles................had been swept out of existence" Here is a good example of Wells use of description and vocabulary. He uses long words like "unfathomable" "precessional" though out this passage. In my view both of the books are excellent and are written in exquisite language. They both use such different ways to show the same subject. They both make time travel seem so alive and magical. It makes the brain think about all the different possibilities that there are out there. I think that I prefer the Time Machine to the Sound of Thunder because of the description used in it, even though more complex it makes my mind wonder more about things then the Sound of Thunder does. The Sound of Thunder's language is too simple for me even if it is more "modern" it is too simple. The only improvement that I could think of the Tim Machine is that the Language was made more up to date but it would still keep its complexity and depths. ?? ?? ?? ?? Name: Deborah Abbott Tutor group: 10R English essay Page 1 of 3 ...read more.