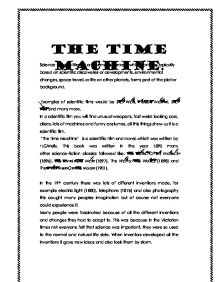 The time machine. Science fiction is literary or cinematic genre in which fantasy, typically based on scientific discoveries or developments, environmental changes, space travel, or life on other planets, forms part of the plot or background. Examples of scientific films would be Star Wars, I robot, Matrix, Star Trek and many more. In a scientific film you will find unusual weapons, fast weird looking cars, aliens, lots of machines and funny costumes, all this things show us it is a scientific film. 'The Time Machine' is a scientific Film and novel, which was written by H.GWells. This book was written in the year 1895 many other science-fiction classics followed like. The Island Of Dr. Moreau (1896), The Invisible Man (1897), The War of the Worlds (1898) and The First Men On The Moon (1901). In the 19th century there was lots of different inventions made, for example electric light (1880), telephone (1876) and also photography this caught many peoples imagination but of course not everyone could experience it. Many people were fascinated because of all the different inventions and changes they had to adapt to. ...read more.

The time traveller was amazed and astonished by this although he expected more intellectual reasoning from them, in chapter4-4.2 it says ' you see I had always anticipated that the people of the year Eight Hundred and Two Thousand odd would be incredibly in front of us in knowledge, art, everything.' he was hoping to learn more has he thought of them as people to bring new science and inventions. In the 'Time Machine the Elois are the upper class they are small pretty people who are very low in intelligence, wear pieces of leather and have the 'intelligence of a 5 year old'. In a normal day Elois pick flowers, play and eat fruits. Elois have become this way because they are used to the happy and unstressful lives so therefore they believe there is no need to stress or worry about life. The time traveller was very disappointed about this because he expected them to be intelligent and advanced, he was also shocked by the amount of stupidity the world had grown into he quotes, 'I thought of the physical slightness of people, their lack of intelligence, and to big abundant ruins, and it's strength ended my belief in a perfect conquest of nature'. ...read more.

From the time traveller's destinations he learned that the future was going to change, that know one was going to remember science or explore it. He also learned that if we weren't careful we would turn into the Elois and Morlocks. Looking into the future helped the time traveller to think more carefully about the present because, as proved in the year 802701 their wasn't much of a future left, for science and inventions all this did not exist they were forgotten. This also made him realise their generation was the time of the using science, ideas and intelligence.This also made him realise that if people of the world don't chang their ways of life all the inventions people had wasted most of their life doing will all go to waste The story of the time machine is still remembered today because H G Well was one of the first writers to write a scientific based story that was so eye catching and intense that it made you wonder if the future would be like that and was also well known and remembered because of the overwhelming predictions he made about the world. ...read more.