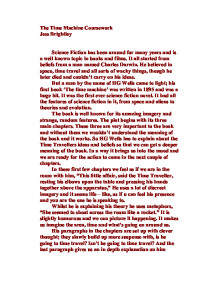 The Time Machine Coursework Jess Brightley Science Fiction has been around for many years and is a well known topic in books and films. It all started from beliefs from a man named Charles Darwin. He believed in space, time travel and all sorts of wacky things, though he later died and couldn't carry on his ideas. But a man by the name of HG Wells came to light; his first book 'The time machine' was written in 1895 and was a huge hit. It was the first ever science fiction novel. It had all the features of science fiction in it, from space and aliens to theories and evolution. The book is well known for its amazing imagery and strange, random features. The plot begins with its three main chapters. These three are very important to the book and without them we wouldn't understand the meaning of the book and it works. So HG Wells has to explain about the Time Travellers ideas and beliefs so that we can get a deeper meaning of the book. ...read more.

Isn't he going to time travel? And the last paragraph gives us an in depth explanation on him getting into the machine and shooting off in into the future. "I resolved to stop forthwith. Like an impatient fool, I lugged over the lever, and in contently the thing went reeling over, and I was flung headlong through the air." This concludes the suspense with a sudden stop of the Time Machine. We are now caught up in the next chapter because we want to know where he has stopped and what it is like. Each paragraph adds a new aspect to the story and we feel as if we have to keep reading. He then travels into a world with two different species; the Eloi and the Morlocks. At first he meets the Eloi, "In another moment we were standing face to face, I and this fragile thing out of futurity. He came a step forwards, hesitated, and then touched my hand." ...read more.

This is just like the Leisure and Working class or the Victorian times. The Time Traveller thinks the Morlocks are the prototype of the working class, due the huge amounts of machinery and electronics underneath the luxury city of the Eloi. Whereas the Eloi are presumed to be the leisure class, as they have a luxury life with everyone working for them. It is clever how HG Wells set this up. As in the Victorian times he would not wanted to offend the Leisure class, as they were thought to be the 1st class people of time. I think that this book has a lot of hidden messages, which if thought about, these can be brought out and the book is seemed to open a whole new meaning. Although it is a Science fiction book, I thoroughly enjoyed learning about it as I learned a lot about hidden depths in writing and about the Victorians and how HG Wells writing is so widely spread. ...read more.